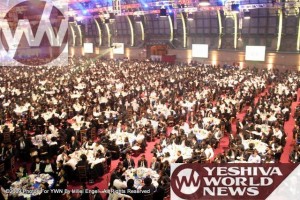 An army of staffers, electricians, chefs and delivery crews are making final preparations to a Brooklyn, N.Y., museum, dozens of classrooms, and a cruise terminal in anticipation of the fast-approaching International Conference of Chabad-Lubavitch Emissaries.

When it opens Nov. 3, the conference will bring more than 4,000 emissaries from more than 70 countries to a five-day smorgasbord of workshops, inspirational gatherings, field trips, and one-on-one counseling sessions designed to strengthen those who strengthen Jewish communities around the globe.

According to Rabbi Mendel Kotlarsky, a conference coordinator, a total of 97 workshops delivered by 300 presenters and moderators will address a variety of topics, including utilizing technology to further Jewish knowledge, running campus activities, and administrating a day school.

This is the first year that all English-language discussions will take place under one roof, while international sessions will be scattered throughout the Crown Heights section of Brooklyn, home to Lubavitch World Headquarters. General sessions will be translated live into Hebrew, Russian and French.

“It’s just amazing to come to an event where every single detail has been planned for months and months in advance,” said Rabbi Nochum Katsenelenbogen, director of Chabad of Owing Mills, Md., who will be attending the conference for the sixth time. “It’s a five star event.”

For Katsenelenbogen, the highlight of the annual conference is seeing emissaries arrive with their children, who take part in a parallel conference.

On Sunday, Nov. 7, lay leaders from communities near and far will gather for a leadership conference devoted to reinforcing the relationship between Chabad House directors and their local supporters. That night, all will join together for the weekend’s anticipated Gala Banquet, held for the first time at the Brooklyn Cruise Terminal at Pier 12 in the Red Hook section of the borough.

Thousands of people, a mixture of emissaries, lay leaders, family, friends and VIPs, are expected for the gala, which will take place in an empty warehouse normally used to store heavy equipment used by the cruise industry.

For years, local media have referred to the banquet as the largest sit-down dinner in New York, noting both its elegant air and a free-flowing energy that always erupts in a round of dancing drawing all attendees in its orbit. This year, Jeffrey A. Moerdler, a commissioner of the Port Authority of New York and New Jersey, assisted in the search for a suitable location.

According to Kotlarsky, the annual transformation from warehouse to banquet hall – last year’s banquet took place at the Brooklyn Armory – requires a gargantuan effort of installing truss lighting, stages, backdrops, drapes, 60,000 square feet of carpet, 350 tables, more than 4,000 chairs and cushions, bathrooms, power generators and projection screens. Dozens of engineers, stagehands and maintenance personnel under the supervision of DS Productions have less than five days to complete the makeover; they won’t install the final sections of carpet until an hour or so before the dinner so that truckloads of catered kosher food can pass directly through what will become the ballroom.

Approximately 350 waiters from numerous agencies – no single one has enough staff to singlehandedly service the five-hour affair – will serve dinner, while personnel from the New York Police Department, the Port Authority and private security firms keep watch on the crowd and the venue outside.

“The whole point of the conference is to bring emissaries and their supporters from around the world together in one place so that we can inspire each other and derive the strength to inspire those around us,” said Rabbi Moshe Kotlarsky, conference director and vice chairman of Merkos L’Inyonei Chinuch, the educational arm of Chabad-Lubavitch. “The work of countless people, emissaries and conference committees always awes us.”

“When you hear countries like Azerbaijan, Baku and Laos being called, and you see the representatives in these countries stand up, you realize these are the ambassadors of the Jewish world,” said Katsenelenbogen. “It’s the most amazing sit down dinner.”

YWN PHOTO ALBUM: Click HERE for photos taken by Hillel Engel at the convention of 5770 / 2009.