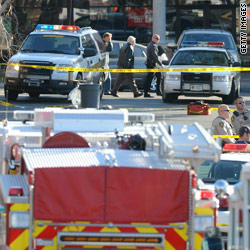 The following is an Op-Ed written by Michael Daly in todays NY Daily News:

Here is what Sarah Palin said on the Facebook page where she depicted Gabrielle Giffords in the cross hairs of a rifle scope: “Don’t retreat! Instead – RELOAD!”

Well, the guy who shot Giffords yesterday managed to keep firing until he killed six, including a child, and wounded 13 .

Palin would no doubt say that she was only speaking in metaphor, that she only meant her followers should work to unseat Giffords and 19 other Democrats who had roused her ire by voting for health care.

But anyone with any sense at all knows that violent language can incite actual violence, that metaphor can incite murder. At the very least, Palin added to a climate of violence.

Palin should have taken it as a warning of what might happen when a Tea Party hothead dropped a gun while heckling Giffords at an earlier Congress On Your Corner event, more than a year ago.

That did not stop Palin from declaring Giffords a “target.” Giffords’ district office was subsequently vandalized, and the congresswoman noted that Palin had put “the cross hairs of a gun sight over our district.”

“When people do that, they have to realize that there are consequences to that action,” Giffords said.

“When you represent a district that includes the home of the O.K. Corral and Tombstone, ‘the Town Too Tough to Die,’ nothing’s a surprise out in Cochise County,” Giffords was quoted saying.

In citing the famous shootout at the O.K. Corral in Tombstone, Giffords did not note that the gunplay was sparked when the Earp brothers sought to enforce town ordinance No. 9.

That law was promulgated on April 19, 1881, by the Earps themselves. It prohibited carrying “deadly weapons, concealed or otherwise” including “firearms of every description.”

For Giffords to have cited Ordinance No. 9 could have meant political ruin in a district that romanticizes the O.K. Corral as part of its “gun culture.”

Either out of political expediency or actual belief, Giffords herself spoke fondly of this supposed legacy of the Wild West.

“In my district and in my state, we have a very strong gun culture,” she said in May when asked for her position regarding a renewed ban on assault weapons.

She had been one of the members of Congress who added their support to the effort to overturn the gun ban in Washington.

She also noted in interviews that she herself owned a Glock 9 mm. The NRA still branded her as an opponent because she had dared to suggest that guns should not be carried in bars.

Even if Giffords had been carrying her Glock at her latest Congress On Your Corner event yesterday, she would have had no time to reach for it and defend herself. Unlike in all those westerns, gunmen bent on homicide almost never give you a chance to draw.

And, unlike in the real Arizona of old, there was no Ordinance No. 9, no Earp brothers in the crowd yesterday to enforce it, to maybe spot the killer with the gun before he had a chance to use it.

The result was exactly the kind of carnage the Earps had sought to prevent with their attempt at instilling gun-control culture.

And, now that Palin may have the blood of more than some poor caribou on her hands, I wonder if she will continue putting people in cross hairs and calling on folks to RELOAD!