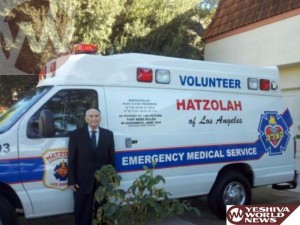 Hatzolah of Los Angeles has put it’s 3rd ambulance into service. This ambulance was donated by Mr. Alex and Eva Friedman in memory of their friends and neighbors in Kiskufelgyhaza , Hungary that were killed in Auschwitz in 1944.

These services come at a critical point for the Los Angeles Community, a time when the Fire Department has been forced to “brown out” some of their stations, limiting the amount of medical resources available to local communities due to budget cuts.

In addition to the ambulances, Hatzolah has been granted permits to operate a limited number “authorized emergency vehicles” in each of the neighborhoods they serve. These vehicles have met the rigorous California Highway Patrol requirements to operate utilizing lights and sirens. These vehicles have been instrumental in allowing Hatzolah members get to the scene of an emergency safely while assisting them through the notorious LA traffic.