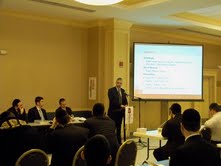 On Sunday morning January 16th, Agudath Israel of Maryland presented a seminar on tax and legal compliance titled “What Nonprofits Need to Know in 2011”. The event was held in the Bnai Jacob Shaarei Zion social hall in Baltimore and drew an impressive crowd of 75 individuals representing the majority of Baltimore’s shuls, schools, and general non-profit organizations.

The program began with introductory remarks by Agudath Israel of Maryland director and the seminar’s coordinator, Rabbi Ariel Sadwin. Rabbi Moshe Hauer, rav of Bnai Jacob Shaarei Zion shared divrei chizuk (words of encouragement) to appropriately set the tone for the seminar. He extolled the abundance of chessed (kindness) in the community and the multitude of organizations that address so many different needs in the community. “We have truly excelled in the midah (trait) of chessed to outstanding proportions but when it comes to the midah of emess (honesty), perhaps we are not always where we need to be.” Quoting the SMA”G (Sefer Mitzvos Hagadol), Rabbi Hauer shared that when it comes to the midah of emess, we must take the extra step – even beyond what may be perceived as necessary – to ensure that what we are doing is indeed completely just and not laced with any amount of dishonesty.  In that way our emess will be comparable to our chessed.

Mr. Kupfer began the presentation by addressing the many intricacies of charitable contributions – including use of donor advised funds, rabbi’s discretionary funds, and Chinese auctions and raffle tickets. Mr. Schabes then took the podium to discuss the relevant criminal laws, various regulatory and reporting obligations, as well as record keeping requirements. Mr. Kupfer followed that by discussing the laws regarding parsonage and tuition reduction programs. Following the presentation, a question/answer session ensued and ended with Mincha.

All in all, the seminar’s participants were very satisfied with the presentation.
“We are very happy that these vital issues are getting the attention they deserve,” said Rabbi Shlomo Spetner, president of Bais Yaakov of Baltimore, “we applaud the efforts of Agudath Israel and Rabbi Sadwin in taking the initiative.”

With the success and warm reception of the Baltimore seminar, other such seminars – both in Baltimore and in the Silver Spring/Greater Washington area as well as other Mid-Atlantic communities – will likely take place in the coming months.