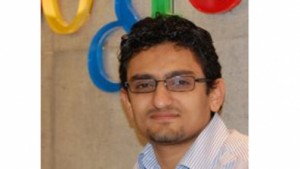 More than a week after his mysterious disappearance in Egypt, Google executive and political activist Wael Ghonim will be released from government detention on Monday, according to his family and a prominent businessman.

During his disappearance, Mr. Ghonim, a father of two who is in his 30s, emerged as a central symbol of the anti-government protests, cast as the face of a movement and hero in the cause of democracy. Protest organizers in Cairo’s central Tahrir Square adopted him as a symbolic leader.

Suspecting his arrest—but having no proof—they declared in speeches that they wouldn’t leave the square until he was freed. Marchers carried homemade signs emblazoned with his name. At the same time, some local media suggested the political activities of Mr. Ghonim, who is Google’s head of marketing for the Middle East and North Africa, make him a traitor to his nation.

On Sunday, Egyptian authorities broke the silence on Mr. Ghonim’s fate, according to his brother, Hazem Ghonim. “They told us they’ll probably bring him to us, and that he will likely be escorted by security,” he said from Cairo.

Billionaire businessman Naguib Sawiris also said on Sunday that Egypt’s vice president told him Ghonim would be released. “The boy is a hero,” Mr. Sawiris said. “When he is released he will become the living hero of this revolution.”

Ghonim is counted among a small group of political activists in Egypt whose social-media savvy over the past year helped spark the massive demonstrations threatening Egypt’s ruling regime. “I said one year ago that the Internet will change the political scene in Egypt and some Friends made fun of me :),” Ghonim wrote on his personal Facebook profile for friends after two days of swelling protests in Cairo. The next day, Jan. 28, he disappeared.

It remains unclear what role, if any, Ghonim played in organizing the Jan. 25 protest movement itself, the largest Egypt has seen in more than 30 years. However, he played a prominent role in online activism in the months ahead of the historic protests.

Last year, Ghonim was one of four administrators running the first of the major Facebook pages that became a virtual headquarters for the protest movement, according to a collaborator in the political opposition, and also according to an Internet activist familiar with the situation. Mr. Ghonim also set up the official campaign website for opposition leader Mohamed ElBaradei and volunteered as a tech consultant for other opposition groups, according to Ziad Al-Alimi, a senior aide to Mr. ElBaradei.

On day six of the unrest, YWN posted the following:  UPDATE 11:16AM EST: Wael Ghonim, head of Google Middle East, has been missing in Egypt since last week. His last two posts on his Twitter page are: “We want #Facebook #Twitter & SMS back. Blocking free speech is a crime.”

And the last one: “Very worried as it seems that government is planning a war crime tomorrow against people. We are all ready to die.”