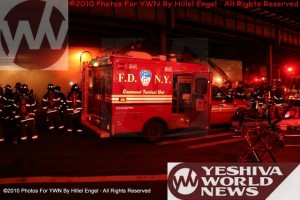 An arson fire in Bedford-Stuyvesant may have been the work of an anarchist with links to the Animal Liberation Front, law enforcement officials said Tuesday.

The ‘Brooklyn Free Store’ was torched on March 19 after an arsonist had tried to burn it down on two previous occasions, investigators said.  The FBI’s Joint Terrorism Task Force has been called in to assist FDNY arson investigators because of the possible ‘ALF’ connections, officials briefed on the case said.

The Animal Liberation Front is considered a violent extremist group by the FBI and US Justice Department.  ALF followers have engaged in illegal actions and sabotage in pursuit of “animal liberation.”  ALF activists in the past have tried to forcibly remove animals from research laboratories even conducting sabotage and arsons in the name of ‘animal rights.’

Law enforcement officials would not say why the ‘Brooklyn Free Store’ may have been targeted by someone with alleged links to ALF.  Spokesmen for the FBI and FDNY declined to comment .

Nobody was hurt in the three separate arson attempts along Walworth St. and DeKalb Avenue.  In the March 19 fire, flames set in a tent quickly spread to and destroyed a nearby three story home.   Clothes, books and other items in the ‘Free Store’ lot were also damaged, officials said.

No suspect has been arrested.