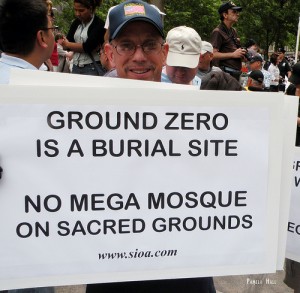 A Muslim couple who had a role in founding a controversial Islamic community center and mosque near the World Trade Center, but were effectively booted from the organization in January, say they are pursuing a new vision for the project.

Activist Daisy Khan said Tuesday that she and her husband, Imam Feisal Abdul Rauf, have spent some seven months having planning discussions with the relatives of 9/11 victims, first responders and others, talking about alternative concepts for the center, including the possibility that it could become a multi-faith center focusing on religious conflict.

Speaking to reporters at a luncheon organized by More magazine, Khan also said the center she and her husband have been discussing might no longer be suited to the current planned location.

The couple’s ability to turn such brainstorming sessions into reality, however, isn’t clear.

The developer of the Islamic center, Sharif El-Gamal, announced in January that Rauf would no longer be involved in planning the center. Khan has never had a formal role in the project.

The two sides don’t appear headed for a reconciliation. El-Gamal’s plans for the center remain unchanged, according to a spokesman. They call for a large health club, day care center and cultural gallery to be built over a subterranean mosque.

El-Gamal has repeatedly said he isn’t open to major alterations to that concept and has spent the past few months putting together plans, arranging financing and establishing a nonprofit group to oversee the center.

On Tuesday, Khan, who heads the American Society for Muslim Advancement, acknowledged that there had been a “divergence” with El-Gamal over the project’s direction, and she said she wasn’t sure what that meant for the future.

“We don’t know what’s going to happen yet. We are assessing the kind of vision we have for the center,” she said. “Whether it’s that site or another site, we won’t know until the end of June, early July.”

But she suggested that she and her husband were willing to plunge ahead separately.

“Of course we are going to! We have a dream. We must fulfill our dream. The dream is not the location,” she said.

Khan also said she felt some of the virulent opposition she and her husband had encountered to the planned center and mosque stemmed from unresolved feelings Americans have about the 9/11 attacks.

“It’s an unresolved conversation,” Khan said. “It’s the first time we were attacked in our homeland, and we found ourselves vulnerable. And we went to war right away. Had we not gone to war right away, we might have been able to have a dialogue.”