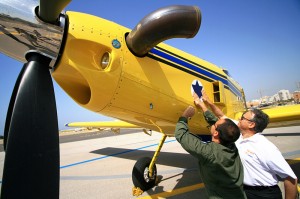 Three firefighting aircraft landed at the Sde Dov Air Force base on Thursday (Mar. 31), to become part of the IAF’s new firefighting unit. Four more firefighting planes are expected to arrive in the coming weeks.

The Air Tractor F-802 aircraft possess one engine and can fly three hours without refueling. The plane is capable is carrying around 3,000 liters of water.

Brig. Gen. Sheffer wished a full recovery to the victims of last’s year’s wildfire in the Carmel forest. Reconstruction efforts in the area affected by that fire are still ongoing.

“I hope that these planes will only go out on training missions and that we will not need them for operational missions,” he said.