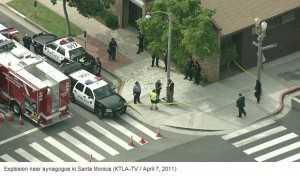 1:10PM EST: [UPDATE IN EXTENDED ARTICLE] A device believed to be a pipe bomb exploded about 6:45 a.m. Thursday in the parking lot of a Chabad Shul in Santa Monica, authorities said.

No details were available regarding injuries or damage.

The incident occurred at a synagogue near 17th Street and Broadway in Santa Monica. Police evacuated a four-block area and were investigating the possibility of a hate crime.

Multiple sources familiar with the investigation said the device exploded just north of the temple. Authorities were trying to determine whether the temple in the 1400 block of 17th Street, Chabad House of Santa Monica, was specifically targeted.

There were no reports of injuries.

The FBI, Los Angeles Police Department bomb squad and Santa Monica Police were all on scene.

There were no reports of injuries following the early morning explosion, which Rabbi Eli Levitansky said worshippers heard behind the Chabad House run by his brother and sister-in-law, Rabbi Isaac and Sara Levitansky.

Sgt. Darrick Jacob of the Santa Monica Police Department said that a call came in about the same time reporting that debris had fallen on an adjacent building’s roof. It was quite possible that the explosion was not caused by a bomb, said the officer.

A statement on the Chabad House’s Facebook page said that most of those at the synagogue Thursday morning “did not hear or feel anything.”

Isaac Levitansky “grabbed the new Torah scrolls” when police told them to exit the premises.

Backed by the fire department and the Los Angeles County Sheriff Department’s bomb squad, police officials decided to cordon off a several-block radius around the 1400 block of 17th street.

“We have to work our way down,” examining all possibilities,” said Jacob. “We have to load for bear, and look for squirrel.”

According to Eli Levitansky, worshippers continued their prayers outside before the evacuation radius was widened by authorities.

Almost four hours after the incident, Aliza Menkes, who directs the Jewish ritual bath a few doors down, said she couldn’t get home. Her son was at the synagogue when the explosion occurred.

“I don’t know anything,” she said. “We live two houses away from the Chabad House. When I left at 9 a.m., two to three blocks were evacuated. Police came in and told everyone to go out.”

Sara Levitansky said that despite the current wrinkle in the daily schedule, staff were pressing ahead with preparations for the fast approaching holiday of Passover, which begins April 18.

“We’re continuing with our preparations,” she said. “We’re picking up 500 pounds of matzah today to distribute to locals and use at our Passover Seders.”