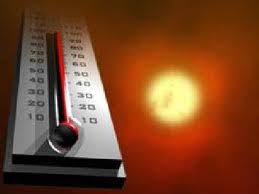 A spell of midsummer-like weather is on tap for the next few days, with temperatures expected to climb considerably throughout the week.

Meteorologists say residents should expect temperatures reaching into the mid and upper 80s today with partly sunny skies and a slight risk of a passing shower or thunderstorm mainly north and west of the city later this afternoon.

By tomorrow and Thursday, temperatures will soar into the 90s.  At this point, it’s possible we may break records for highs on Wednesday and Thursday.

Current record highs in Central Park for June 8 and June 9, both set in 1933, are 95 degrees and 97 degrees respectively. Right now, meteorologists predict we’ll hit a high of 94 degrees Wednesday and a tie the record 97 degrees Thursday.

The high temperatures will combine with a rise in the humidity level, putting the heat index at or a little higher than 100 degrees by Thursday afternoon.

There remains a chance for scattered afternoon and evening thunderstorms, primarily west of the city, both Wednesday and Thursday.

In addition, an air quality alert is in effect today for all of New Jersey. Anyone with breathing or respiratory issues should limit their time outdoors during the peak heating hours of 11 a.m. to 5 p.m.

The heat should subside over the weekend with slightly cooler air pushing down from the north as high temperatures only climb to near 80 degrees for both Saturday and Sunday.