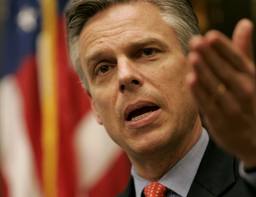 Jon Huntsman formally launched his presidential campaign on Tuesday in a speech emphasizing his foreign policy and global economic credentials, and echoing with the themes of Ronald Reagan.

With the Statue of Liberty as a backdrop, Huntsman introduced himself as “a governor of the great state of Utah, a businessman, and a diplomat” and outlined a campaign that will steer clear of attacks of both the other seven GOP contenders and his former boss, Barack Obama.

“I don’t think you need to run down anyone’s reputation to run for president,” Huntsman told the crowd of 100 gathered at a pavilion jutting out into the Hudson River. “I respect my fellow Republican candidates. And I respect the president. He and I have a difference of opinion on how to help the country we both love.”

“But the question each of us wants the voters to answer is who will be the better president, not who’s the better American,” Huntsman said.

But the campaign did kick off with Huntsman setting himself apart from the field: As he and his family walked more than 400 feet across the lawn leading up to the podium where he spoke, an introductory video of a motorcross biker with “Huntsman” printed on the back of his jacket introduced the candidate as “the ultimate conservative” who is “no mainstream politician.”

Huntsman cast the recession as fundamental change in the American story.

“For the first time in history, we are passing down to the next generation a country that is less powerful, less compassionate, less competitve and less confident than the one we got. This, ladies and gent, is totally unacceptable and it is totally un-American,” he said. “It need not, must not, will not be our permanent condition. We will not be the first American generation that lets down the next generation.