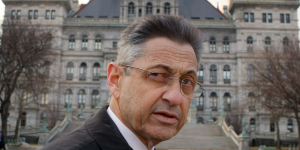 There were passionate protests on Wednesday and still no vote on same-gender marriage from the Senate.

Republicans, who control the vote, have yet to decide if they want one — or when.

You could hear the sound ringing throughout the state capital — pro and con chanting from both sides of the same-gender marriage debate. As of late Wednesday afternoon, senators seemed to be tuning out pleas to make a decision one way or the other.

The issue appears to be one vote shy in the GOP-controlled senate. The governor is trying to win votes for the Marriage Equality Act by adding language to protect religious organizations from lawsuits for refusing to accommodate same-gender couples who want to get married.

“My colleagues and the counsel’s office are looking very closely at the religious protections and I think they are working through that once we have final legislation we will discuss it,” Skelos said.

“The concepts, certainly, are agreed to but there is no final agreement on the language,” Silver added.

Cuomo, a sponsor of the controversial measure, said he felt positive votes were stacking in favor of the bill.

“Not that you know it’s going to succeed because you never know until the vote is actually cast, but we reached a point, a threshold where we believe there was a high likelihood of success,” Cuomo said.