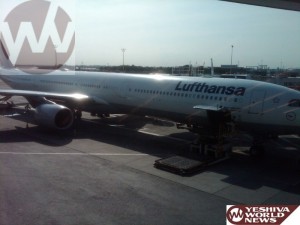 [PHOTO LINK BELOW] As a follow up to the earlier YWN article about the near-miss at JFK, YWN has spoken to one of the passengers aboard the Lufthansa aircraft.

Mordy Siegel of Flatbush tells us that it was a terrifying experience, but everyone remained calm, and behaved in an orderly fashion.

He says he was sitting is seat 1A, on flight LH411 to Munich. The plane was then scheduled to fly from Munich to Tel Aviv. He tells us that there were other Frum passengers aboard the aircraft, one of them in seat 2D who was heading to a Chasunah in Brussels. Other Frum passengers were in the rear of the plane – all heading to Eretz Yisroel via Munich.

He says the plane began rolling down the runway, gathering speed.

“Approximately midway through its takeoff roll everyone heard the reverse thrust kick in and the pilot slammed on the breaks. We came to a stop very quickly, and stayed on the active runway. Nothing fell from the short stop, but people became very alarmed and the captain or the stewardess did not inform anyone what was going on”, Siegel said.

“After approximately 5 minutes we taxied onto a taxiway and stopped. Emergency Services arrived quickly, and the pilot finally informed us of what happened. He said that because he had applied the brakes so hard, he was now getting warning messages that indicated the brakes were overheated, and that’s why the fire department was there.”

“He then informed us that we would be going back to the gate to be inspected and to refuel.”

The flight was then delayed approximately an hour and a half to two hours. All the passengers were very calm throughout the incident. When the inspection and refueling of the aircraft were completed, the flight received priority takeoff clearance from the tower, and passed a long line of planes waiting to takeoff.

Siegel says that the second takeoff attempt was uneventful and he’s “grateful to Hashem that he landed in Eretz Yisroel in one piece”.

He added that because of the delay at JFK, they missed the connecting flight in Munich. Lufthansa only has one flight a day to Tel Aviv from Munich so most people were then re-booked on Lufthansa to Turkey, and then Turkey to Tel Aviv on Turkish Airlines. It was a nightmare, but everyone was happy that the event ended without injury – or worse Chas Veshalom. When the plane returned to the gate in JFK, some people decided to get off because they were so upset, even though their luggage was going to go to Munich without them.