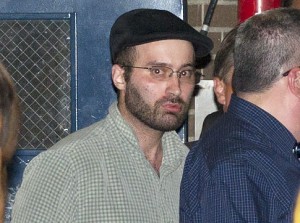 WARNING – GRAPHIC: Hardware store clerk Levi Aron, who was charged Wednesday night with brutally murdering 8-year-old Leiby Kletzky, gave cops a chilling confession, describing in graphic detail how he suffocated the child with a bath towel and carved up the body in a “panic.”

Leiby vanished early Monday evening while walking home from a Borough Park day camp alone for the first time. Police said that even though he had practiced the route, he got lost and approached Aron for help.

In his confession, posted on the Web site of NBC New York, Aron spun a bizarre and improbable tale, claiming he simply offered to give Leiby a lift to a Jewish bookstore, then invited him to a wedding in upstate Monsey.

Excerpts of Aron’s confession to police: This transcript has been edited to remove parts of an extremely graphic nature. It has not been edited for clarity.

“He asked me for a ride to the Judaica Book store. While on the way, he changed his mind and wasn’t sure where he wanted to go. So I asked if he wanted to go for the ride – a wedding in Monsey – since I didn’t think I was going to stay for the whole thing since my back was hurting. He said OK.”

“Due to traffic, I got back around 11:30 p.m. … so I brought him to my house, thinking I’d bring him to his house the next day. He watched TV, then fell asleep in the front room. I went to the middle room to sleep. That next morning, he was still sleeping when I was ready to leave. So I woke him and told him ‘I’ll bring him to his house’… when I saw the flyers I panicked and was afraid.”

“When I got home he was still there so I made him a tuna sandwich.”

“I was still in a panic … and afraid to bring him home. That is when I went for a towel to smother him in the side room. He fought back a little.”

“Afterwards, I panicked because I didn’t know what to do with the body.”

“… [I] carried parts to the back room, placing parts between the freezer and the refrigerator.”

… went to clean up a little then took a second shower.  I panicked and .. Then putting the parts in a suitcase.  Then carrying suitcase to the car …placing in backseat on floor behind passenger side.

… drove around approximately around 20 minutes before placing it in the dumpster on 20th street just before 4th Avenue.   Then went home to clean and organize.

I understand this may be wrong and I’m sorry for the hurt that I have caused.