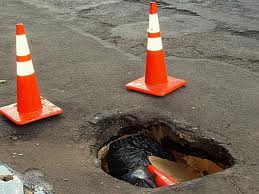 Defying the brutal winter and its accompanying deluge of potholes, the city’s streets are now in the smoothest shape since 2005, according to the Transportation Department.

It’s also the highest percentage since 2005, when 73 percent of streets made the grade. Those in the pothole trenches greeted the news with deep skepticism.

Transportation officials boast that they’ve filled a record 418,168 potholes on streets and highways, or 23,168 more than in 2010.