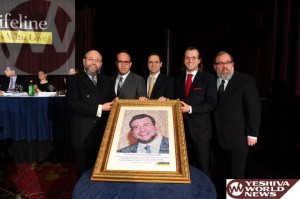 Chai Lifeline’s 2011 Rededication Gala drew more than 1,200 friends and supporters who came to celebrate the achievements of Chai Lifeline, the international children’s health support network, pay tribute to one of its major supporters, and to hear its leaders outline their vision for the future.

“We could coast…I dare to dream,” Rabbi Simcha Scholar, executive vice president, as he introduced Solomon’s Children’s Initiative: The Superfund for the Future. Solomon’s Children’s Initiative is named for Shlomo Obstfeld, z’l. The late businessman, a close friend and supporter, who was known for his chesed and concern for Chai Lifeline’s families. In addition to his numerous personal activities on their behalf, Mr. Obstfeld dedicated Camp Simcha Special and the Obstfeld Pavilion on the Camp Simcha campus in his father’s memory.

“Shlomo’s goal was to put smiles on the faces of children in tremendous pain,” Rabbi Scholar noted before the event started. “His leadership gave us the ability to dream. His legacy will be a renewal of the Camp Simcha campus that will allow us to increase the number of children who can enjoy a life-affirming vacation at Camp Simcha and Camp Simcha Special, and new programs that will help cancer survivors and chronically ill young adults face the future.”

The Rededication Gala included a moving tribute to Obstfeld’s life and dreams by his colleagues at LH Financial Services. The firm is committed to carrying Obstfeld’s dream forward. It has become the benefactor of Chai Lifeline’s annual winter family retreat, which was renamed in appreciation.

Joseph Sprung, a member of Chai Lifeline’s executive committee and a former president, was recognized for two decades of involvement and service to the organization.

“When he was first introduced to Chai Lifeline, we were much younger and much smaller. By graciously giving us his time, expertise, and resources, he has enabled us to become the organization we are today,” said Samuel Zaks, executive director, development.

Sprung relayed the story of a young boy he met during a visit to an Israeli hospital. The child attended Camp Simcha the next summer, and Sprung went to see him. “He was in a golf cart, and he stood up and said, ‘I told you I would make it to Camp Simcha.’ It wasn’t just coming to camp. It was the dream of Camp Simcha that kept him alive,” he stated.

“When I visit hospitals and I tell people I am affiliated with Chai Lifeline, there’s a tremendous level of respect for the organization,” he added. 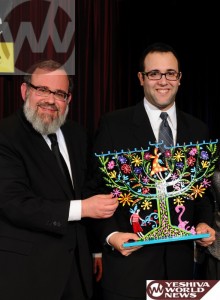 In addition to working closely with our professional staff to recruit counselors for events and activities, the Schwartzes have opened their home to a teen who is seriously ill.

“Yossi and Deeni have created a whole new model of volunteer commitment. They are role models for a new generation of Camp Simcha counselors and year-round volunteers,” said Zaks. He expressed the organization’s gratitude to the large contingent of current camp staff and camp alumni for their work year-round.

“Many of our camp counselors devote hours every week as Big Brothers and Sisters and event counselors. They care for our children with amazing love, compassion, and dedication,” he continued. 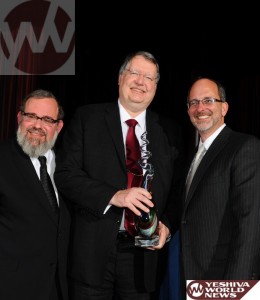 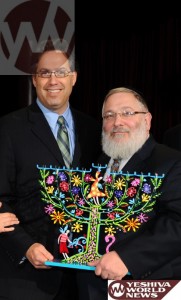 Rob and Annette Satran received the Keter Shem Tov Award for their establishment of the Scott Satran Memorial Fund in memory of Rob’s brother, Scott. Scott was in high school when he was stricken with cancer; his death preceded the establishment of Chai Lifeline.

“Scott would have loved camp. When we go there, we see 400 kids walking in his footsteps,” said Rob.

The Scott Satran Memorial Fund will provide scholarships to Camp Simcha, allowing more children to find a place where they can forget about illness and just be kids again.

“Greg and Michelle were so intrigued when they visited Camp Simcha for the first time that they promised themselves – and us – that they would do everything they could to ensure that children with cancer and other serious illness would always have a magical place where they could trade a hospital bed for a bunk bed,” Katlowitz told the capacity crowd.