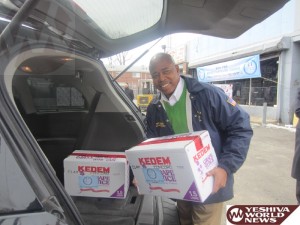 As part of its effort to serve the community, the Boro Park Jewish Community Council (BPJCC) distributed almost 3000 cases of grape juice as part of its Pesach distribution. The grape juice, obtained through the efforts of the Met Council on Jewish Poverty, was in addition to the close to $100,000 in food vouchers that had been previously distributed.

“During these difficult times when so many people in our community are still struggling financially, Pesach becomes an even extra burden and so the JCC was glad to be of some assistance,” said Isaac Stern BPJCC president. The Grape Juice was allocated through the various kehillas and shuls for their membership.

BPJCC, an affiliate of Met Council, was founded to serve Boro Park and surrounding areas with all their social service needs, including Medicaid and Child Health Plus, food stamp enrollment, employment services, crisis assistance and services to seniors and holocaust survivors.