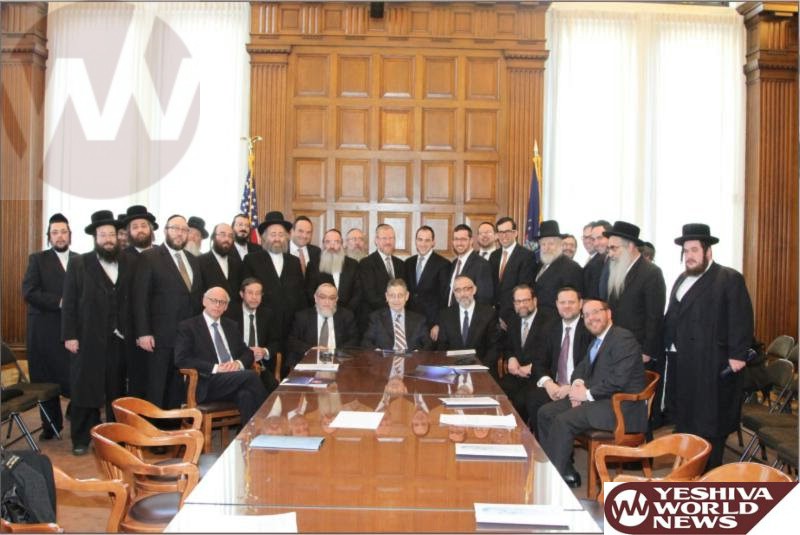 The New York State Capitol building in Albany was dotted with black hats, yarmulkes and wigs as over 50 men and women from all walks of Orthodox life – from neighborhoods across the state – spent their Wednesday partaking in Agudath Israel of America’s annual mission to top New York State government officials.

The smiles and warm handshakes exchanged between members of the mission and legislators of both parties attested to the extent of the relationship that has been built up over the five years of this annual mission, and well before that. The mission was the product of months of planning by various Agudath Israel activists including, Rabbi Chaim Dovid Zwiebel, Executive Vice President; Rabbi Shmuel Lefkowitz, Vice President for Community Services; Rabbi Yehiel Kalish, Vice President for Development and State Relations, and Rabbi Shai Markowitz, Director, Lefkowitz Leadership Initiative.

In meeting after meeting, the historic size of the activist delegation and their diversity in age, garb and background made a tremendous impression upon those on the governmental end. And in meeting after meeting, the mission made it unambiguously clear what is our community’s top legislative priority: the Educational Investment Tax Credit (EITC). 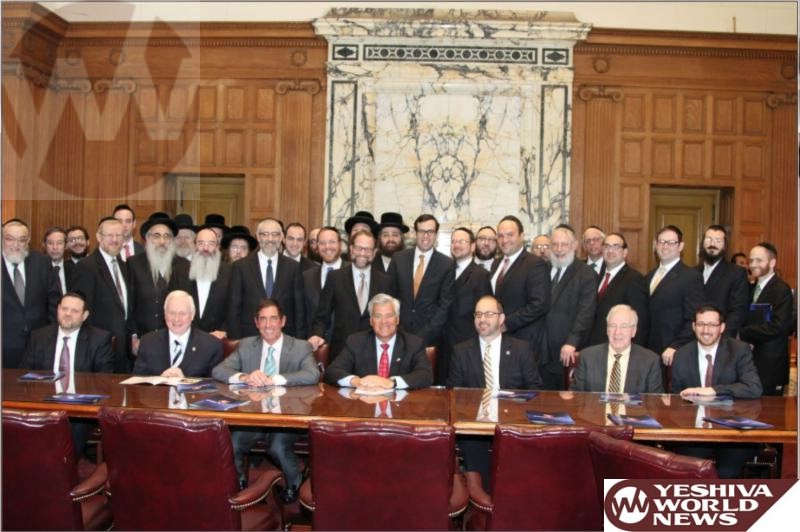 The EITC initiative follows similar laws that have been enacted in states across America, where donors to a scholarship fund for private school students can deduct their donation amount from their state tax liabilities.

Chaskel Bennett, member of Agudah’s Board of Trustees and noted activist, raised his Blackberry and read out loud a powerful email sent to him the previous night by the administrator of an Orthodox girls school, in which he decried the financial strains of both parents and schools, and left no room for doubt that relief is needed “Now!”

The Senate has already passed the tax credit bill twice, and Governor Andrew Cuomo, in addition to many Assembly Democrats have announced support for the concept. During the Assembly roundtable discussion, Speaker Silver emphasized his empathy for the plight of hard-pressed tuition paying parents, but indicated that the bill was still evolving and that he was carefully studying the matter. 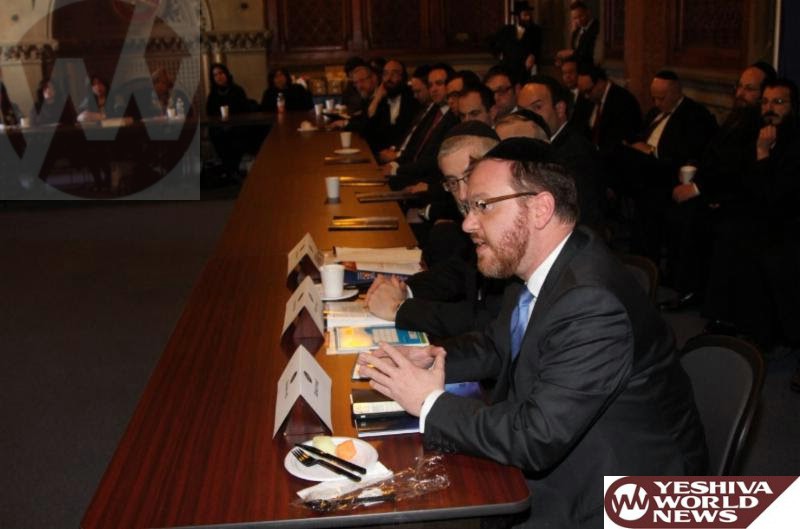 Although the educational tax credit was clearly at the top of the activists’ agenda, it was far from the sole crucial item on there. In the words of Majority Leader Skelos, “You always give us a robust agenda – with heart behind it.”

Dovetailing the discussion of education tax credits were pleas to boost the amount of government funding of mandated services and CAP for non-public schools, as well as include non-public schools in initiatives to subsidize universal pre-K preschool and Smart School Bonds for the use of technology in the classroom. 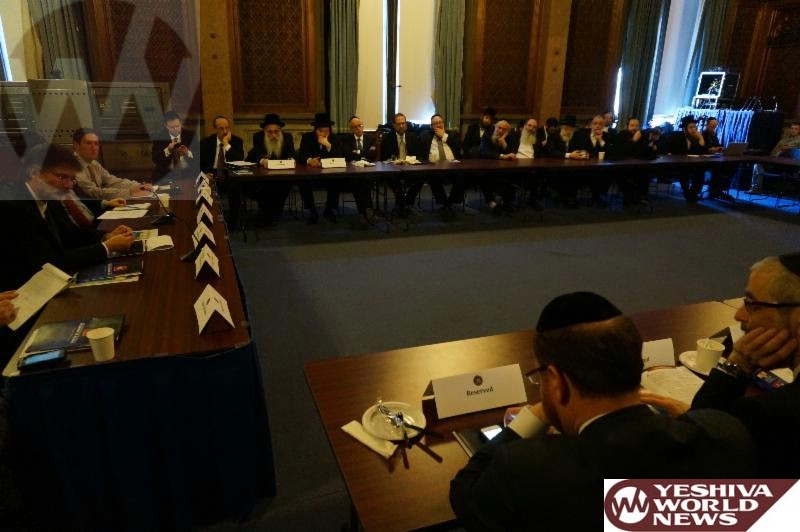 Rabbi Gavriel Bodenheimer, Dean of Yeshiva Bais Mikroh in Monsey, offered an articulate description of the challenges faced by residents of the East Ramapo School District in Monsey, where the current educational funding formula shortchanges the district due to its lopsided nonpublic to public school student ratio, and has led to enormous local strife.

Noted Agudah activist Mr. Leon Goldenberg spoke about the importance of funding community job training initiatives, which offer culturally sensitive opportunities for those who would not attend secular universities to build successful careers and provide for their families independent of government social programs. He related his involvement at Agudah-affiliated Project COPE, which graduates about 200 junior accountants a year, with a placement rate of 85%-90% or more.

Several activists brought to life some particularly painful issues where state government can offer relief. Mrs. Rivky Meisels, a veteran volunteer for the Bonei Olam organization, urged increased government funding for infertility treatments and read – verbatim – from a letter written by a woman who struggled with infertility and is now the proud mother of a beautiful baby girl.

Mrs. Leah Steinberg, Agudath Israel’s Director of Special Educational Affairs, expressed gratitude for government funding of various special education programs and how they help children overcome their challenges more than their parents ever imagined. However, Mrs. Tali Abrahamzon, Program Director of Bonim Lamokom, added that there is still a lot more to be done. She relayed in vivid color the struggle, constant delays, and wealth of legal expenses, that Orthodox parents with children who require special education endure in their quest to secure funding for placement in a culturally sensitive special-ed institution. 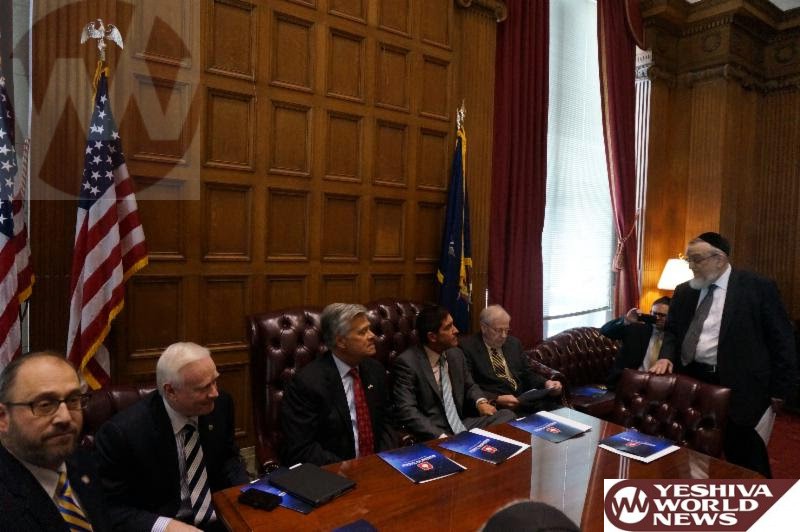 Mission members also mentioned the areas where the most elementary tenets of respect for Jewish life can still be improved in the United States Rabbi Lefkowitz repeatedly stressed the importance of end-of-life issues, and ensuring that physicians are not compelled to pressure patients with chronic diseases to choose hospice and palliative care, over extending life. Rabbi Boruch Ber Bender, President of Achiezer, related a personal anecdote about his grandfather, whom doctors had told several months ago that he had no hope R”l, and are now sorting the options to discharge him from the hospital.

Then came the always-troubling issue of anti-Semitism in the public square. Village of Lawrence Trustee Michael Fragin spoke about how it seems acceptable to publicly state – even in America, in 2014 – that one is anti-Hasidic and is opposed to the construction of Orthodox residential development in their area.

Village of Kiryas Joel Deputy Mayor Gedalye Szegedin raised his hand to announce, “I second that.” At the conference with Cuomo administration officials, Rabbi Zwiebel praised the governor for mentioning the saga of anti-Semitism in the Pine Bush school district in upstate New York in his State of the State Address, where he urged the government to crack down on any such incidents.

A Call to Action

Agudath Israel’s activists noted that the extensive lobbying efforts represented by this and other missions often bear solid tangible fruit for our communities. Some of the high profile victories in recent years include funding for private school transportation and TAP subsidies for religious post-high school institutions. 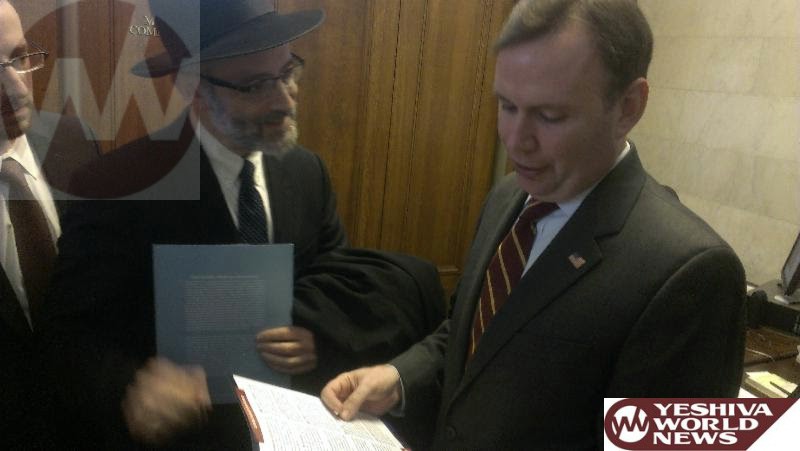 Rabbi Zwiebel could not help but marvel at the atmosphere around him. “A lot of stereotypes get shattered on a day like today,” he said. “Despite any differences we may have, we are a community that is united and cares for each other.”

However, the attendees stressed that more can still be done. Assemblyman Goldfeder related that he received many emails from his non-Jewish constituents praising his work on private school education, but only about four from his many Orthodox constituents. “And those four live near my block,” he quipped.

Nothing gets legislators’ attention like an outpouring of grassroots support, and every member of the Orthodox community can serve as an effective lobbyist in his or her own right. Mr. Weider said that being an elected official who is lobbied all year offered him great perspective on the day when he was lobbying elected officials. “I can’t stress enough how much people need to tell lawmakers what they want,” he said. “When citizens raise concern, it automatically becomes an ‘issue’ in the eyes of legislators.” 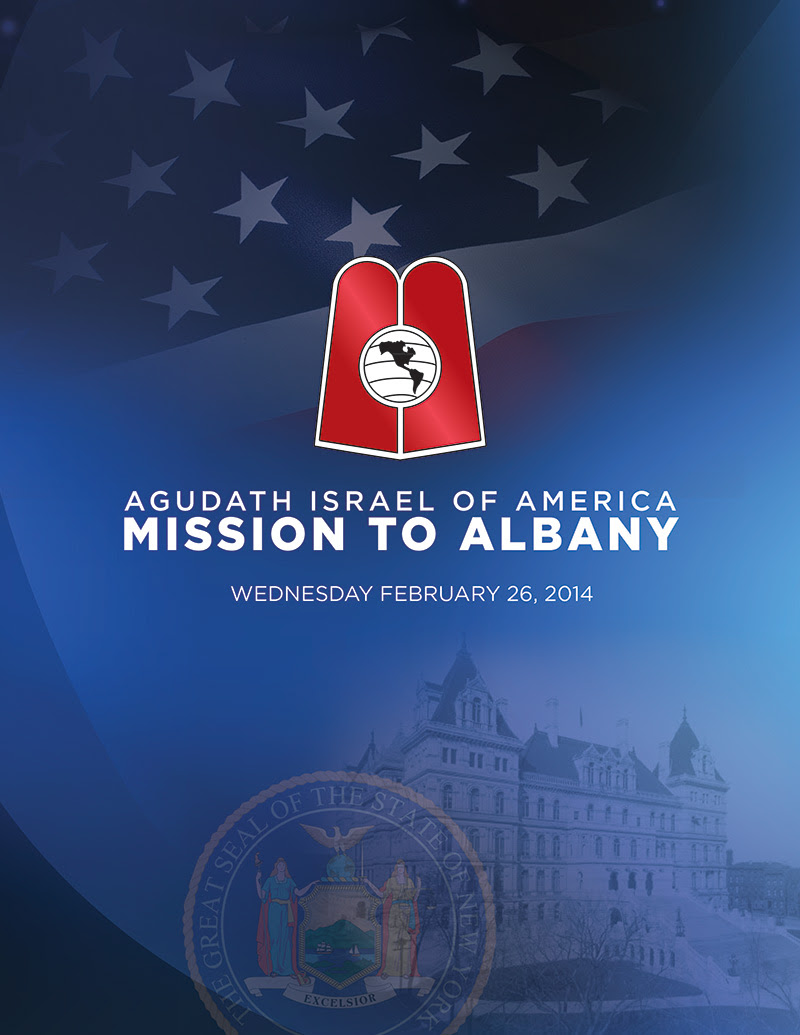