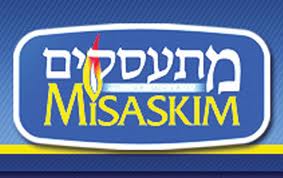 The month of Tishrei is one of the most intense months in Misaskim’s year-round operations. With the memories of the many difficulties and struggles of Klal Yisroel in 5774 still painfully fresh, Misaskim has once again organized its annual Aseres Yemei Teshuva massive tefillah gathering for the tinokos shel bais rabban. On Tuesday, September 30th, children from over 35 Brooklyn yeshivos streamed to the Bobover shul in Boro Park for the 22nd annual tefillah asifah to recite tehillim on behalf of all yiddishe cholim. Their sweet young voices were joined by the tefillos of other Yiddishe children and rabbanim in cities across the United States and worldwide, including London, Manchester, Antwerp, Toronto, Montreal, Panama City, and Mexico City. The children were led in the recitation of Pirkei Tehillim by Harav Don Segal shlita, followed by mincha. Avinu Malkeinu was led by Harav Yitzchok Tyrnauer shlita. Harav Yechezkel Roth shlita concluded the gathering with the Shlosh Esrei Middos and Kabbalos Ol Malchus Shamayim. For all who were assembled, there was hope that Hashem would be mekabel the sweet tefillos of His precious children and grant all our cholim a refuah shlaima bkarov.

As Jewish families enjoyed Simchas Yom Tov, for many yesomim the void of losing a parent leaves a perpetual scar, particularly on Chol Hamoed, a time when families gather and enjoy outings. As in past Chol Hamoed events, Misaskim stepped in with a multi-faceted program. On Monday, Chol Hamoed Sukkos, hundreds of yesomim joined Misaskim for its semi-annual grand Chol Hamoed event. Families arrived on coach buses from communities all over the tri-state area and gathered in the Tiferes Rivka Ballroom in Boro Park for a day of fun, food, and wholesome entertainment. The program began at 10:30 AM with an inspiring Judaica Display which consisted of over 40 beautiful displays of Jewish events that take place throughout the year. An exciting juggling show came next, followed by a thrilling trampoline show.

After the morning’s events, the crowd headed to a 4500 square ft sukkah, built especially for this event for an elaborately catered seudas Yom Tov. The yesomim were then treated to an action-packed simchas bais hashoeiva. Joined by numerous choshive rabbanim, the celebration kicked off with a 13-piece band, with entertainers Avraham Fried, Benny Friedman and the Yedidim choir at the microphone. The ballroom erupted in song and dance with the true joy of simchas Yom Tov. The program continued with a professional march by a group of young boys and a performance by the world renowned Twins from France. The day’s program concluded with an awesome outdoor fireworks display, after which the buses departed with the tired and happy children, each with a special gift presented to them by the Misaskim volunteers.

On a more somber note, soon after the zman on Motozei Yom Tov, Misaskim volunteers swung into action to assist the numerous aveilim who suffered losses of loved ones over the ten days of the chag. In a true display of chesed, many volunteers donated their time on this very busy evening to participate in deliveries of shiva supplies to communities all over Brooklyn, Staten Island, Queens, Cedarhurst, Manhattan, Lakewood, Monroe, and Rockland County. In all, volunteers participated in 54 deliveries on Motzoei Yom Tov, to assist the over 160 aveilim who began sitting shiva at that time.

The tragic death of the 3-month old girl in Yerushalayim at the hand of a terrorist had ramifications on these shores as well. The grandmother of the murdered young innocent victim was on a flight home to New York from Eretz Yisroel when the unspeakable event happened. Misaskim arranged for some family members and friends along with custom agents to meet her as soon as the plane landed-so that the news could be broken to her and to put her on a flight immediately for the return trip to Eretz Yisroel. Her plane landed at 9:45 pm and she was back on the 11:50 flight after receiving her luggage and checking in again.

For Misaskim, the month of Tishrei was a mirror of its mission, stepping in to provide assistance, support, and comfort where it is most needed. While being involved in these programs for Cholim and Yesomim, the organization was still caring for meisei mitzvah, preventing autopsies, heading off cremations, and representing many before law enforcement. For Misaskim’s leadership, there was hope that the exhaustive month of Tishrei would usher in a year of health and menuchas hanefesh for klal Yisroel.