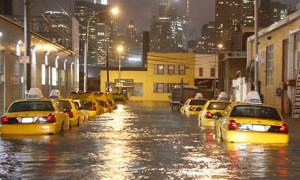 Neighbor helping neighbor. Trust in a community. Looking out for each other.

An Associated Press-NORC Center for Public Affairs Research survey suggests that those factors — collectively termed “social resilience”— have a big impact on how prepared communities feel for disasters such as Superstorm Sandy, and are seen as more valuable in a crisis than even government.

The survey polled more than 1,000 residents in a dozen communities hit by the 2012 hurricane in New York and New Jersey. It found that, regardless of income, residents in areas where people say their neighbors actively seek to fix problems in the neighborhood are three times more likely to say their community is extremely or very prepared for a disaster than people in communities without such social resilience.

Likewise, 37 percent of residents in areas reporting high levels of neighbors helping each other are very or extremely confident their neighborhood would recover quickly from a disaster, compared to 22 percent in areas with lower levels of neighborly cooperation.

The survey also showed residents rely more on neighbors than government. Sixty-nine percent of respondents said they got help from neighbors in recovering from the storm, while 57 percent said local government assisted them and 55 percent cited federal government agencies as helpful. The survey has a margin of sampling error of plus or minus 4.3 percentage points.

Experts say fostering that type of bottom-up help is just as crucial as addressing infrastructure needs and policy makers should take heed.

“Having that level of trust, that preexisting level of trust means you sort of have this reservoir to draw from in times of need,” said the survey’s principal researcher Kathleen Cagney, a University of Chicago sociology professor and director of the Population Research Center at NORC at the University of Chicago. “Money doesn’t buy these informal reservoirs. You need to foster this.”

The city is launching a pilot program in a public housing development that will designate floor captains on each level to collect information on who is staying during a storm and what medical needs they may have. If successful, Hoboken’s budget includes $25,000 to expand the program to public and senior housing throughout the city.

Hoboken resident Steve Peloquin, who works as a motion picture studio mechanic, has crafted another proposal to model rapid response teams based on how movie crews move in and out of areas. His job routinely entails setting up power, arranging for food and other amenities for crew members, and those same needs can arise during a disaster.

“We’re the guys that figure (problems) out on a moment’s notice,” said Peloquin.

In West Islip on New York’s Long Island, another community found to have high levels of social resilience, health insurance executive Sandra Galian has drawn upon her experiences during Sandy to find more ways for neighbor to help neighbor.

Galian’s home was flooded with three feet of water during the storm, forcing her family to flee. She, her two kids and husband spent 12 weeks living with friends before finding temporary housing. She used her contacts as part of a civic association and created an email chain sharing information and giving updates on recovery resources.

“I felt obligated to my family, friends and neighbors to help as much as I could,” Galian said. “I was faced with a lot of questions and people just not having the right information.”

The AP-NORC survey findings are similar to those of Purdue University professor Daniel Aldrich, who studied 120 coastal communities in Japan struck by the earthquake-generated tsunami in 2011 that killed 18,000 people.

Areas with higher crime rates prior to the tsunami recorded higher death rates than areas with lower crime rates. Survivors reported being saved by people they trusted in their community.

“Social capital is not some random outcome,” he said. “It’s a resource that can be deliberately created.”