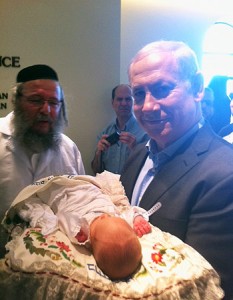 Thursday’s terror offensive in southern Israel overshadowed the celebration – but a circumcision ceremony must take place, even when the newborn’s grandfather is none other than Prime Minister Benjamin Netanyahu.

The new grandson, David Roth, is the second son of Noa, 32, Netanyahu’s oldest daughter from his first marriage, and her husband Daniel Roth. Noa became religious several years ago.

The prime minister arrived at the event with his wife, Sara, and their two sons, Yair and Avner. Due to the security situation in the south, he left after only half an hour without staying for the festive meal that followed the ceremony, and appeared very tense.