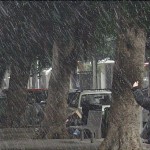 There was an abundance of rainfall in the northern and central areas of Israel on Wednesday, 19 Cheshvan Baruch Hashem. The heaviest rainfall was reported in the Gush Dan region, particularly in Tel Aviv HaMevaser reports. The heavy rainfall in that area resulted in flooding, major traffic delays and the closing of Sdei Dov Airport.

Meteorologists report that quantity of rainfall seen during two hours in the morning was truly rare, especially in November. The most rain was recorded in Ramat HaSharon (60mm – 2.3 inches), followed by Tel Aviv (55mm – 2.1 inches), Haifa (14mm – .5 inches) and Yavne (6mm – .2 inches).

As a result, roadways were closed for periods of time and residents in Tel Aviv that live in flooding-prone areas complained that once again, they face another winter of damage to property due to inadequate sewage and drainage. Tel Aviv officials rejected the criticism, explaining the sewage system is not constructed to accommodate such heavy rainfall in a short period of time, as was the case, a rare occurrence.

Snow was reported on the upper level of Mount Hermon on the Golan Heights. Thursday, 20 Cheshvan is supposed to bring additional rainfall and occasional thundershowers, particularly in the north.

Friday’s weather calls for rain in the north and center, including thundershowers, flooding in prone areas, and the rainfall will spread to the Negev during the day on erev Shabbos.

Shabbos calls for more rain and thundershowers and strong winds from the north to the Negev regional. There is a severe flood warning in effect for Shabbos. Temperatures on Friday and Shabbos will be unseasonably cold.