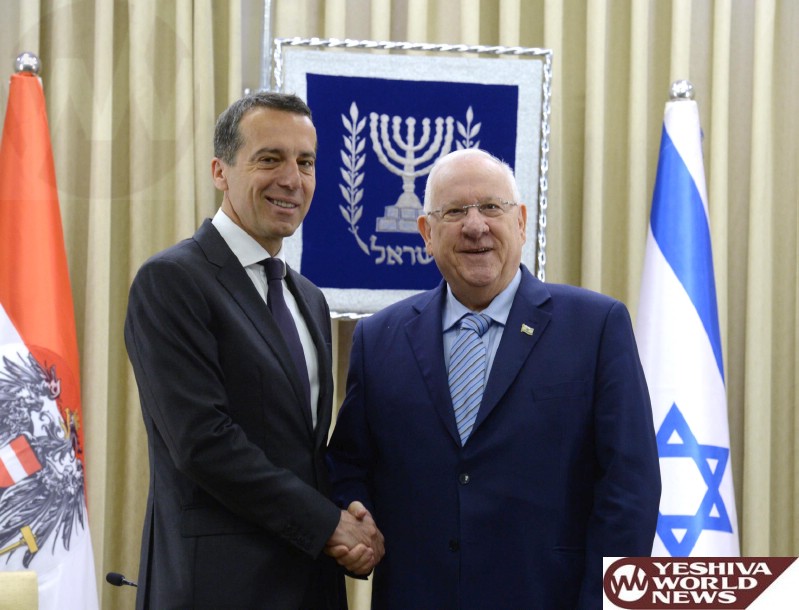 President Reuven Rivlin on Sunday morning 27 Nissan held a working meeting at his residence in Jerusalem with Austrian Chancellor Christian Kern who was making his first visit to Israel. Later the Chancellor was due to visit Yad Vashem, and then participate in the Yom HaShoah commemorations.

Mr. Rivlin spoke of the Chancellor’s visit on the occasion of Yom HaShoah and said, “Mr. Chancellor, we are connected not only by the present and future, but also by the past: and of course the painful past of the Holocaust. This painful past, and especially the issue of Austria’s responsibility for its part in this past, have influenced our diplomatic relationship. Tonight, Israel is marking its national Holocaust Memorial Day – in which we appreciate that you will take part. Israel appreciates your leadership in promoting awareness of this collective responsibility in Austria. Unfortunately, anti-Semitism and fascism have not disappeared – not in Austria, and not in Europe.”

He added, “I would like to also express my appreciation for your strong and clear voice against such intolerance and hatred. We face challenges and we face opportunities: but we can face them together.”

Chancellor Kern thanked the President for his warm welcome, and spoke of the importance of the economic bilateral relations between the two countries. He said, “Last year we celebrated the 60th anniversary of our full diplomatic relations, and today the bilateral relations have reached unprecedented levels. Our trade relations, investments, and tourism have reached all-time high levels.” He noted that, “Israel has gained a reputation as one of the most important Start-Up Nations, and this concept has reached and inspired so many Austrians,” and added Israel was “a vibrant place, it is an incredible economic dynamic that you have realized here, and Israel has become a model for many other countries.”

He went on to say that “Visiting Israel is not always about the future, it is also very much about our history and our legacy.” He noted, “We have come a long way from the official denial, to the acknowledgement of our responsibility for the darkest chapters of our history. It really took decades, but tonight we will honor the martyrs and the heroes of the Holocaust, hand in hand, and shoulder to shoulder.”

The Chancellor went on to recount that his grandmother had worked in the home of a Jewish couple in Vienna who were forced into hiding when the Nazis arrived in Austria. He told how his mother as a child, would take food to the couple each day until one day she arrived to find the Gestapo there who chased her away. He explained the Jewish couple were never seen again. He noted his mother would often tell him about this and stressed, “These days, we have to be aware the direct line of remembrance is breaking, the witnesses of that dark period are passing away.” He went on to explain he had also served as the CEO of the Austrian Railways, during which time he had worked to promote an understanding of the history of the railways during the Second World War, which had provided a logistical backbone for the Nazis.

The Chancellor concluded, “We have to increase our efforts to keep the memory alive, and we don’t just do this to honor the memory of the victims, but I am convinced we must do this for ourselves and for the next generation. It shows and defines in which society and in which future we want to live.” He stressed, “Wherever anti-Semitism raises its ugly head we will stand together with our Jewish friends and fight against it. We will never rest to guarantee the integrity, dignity, and the safety of our fellow Jewish citizens. I stand here as a true friend of Israel, committed to continuously growing the relationship between Austria and Israel, and I am looking forward to doing that over the coming days.”