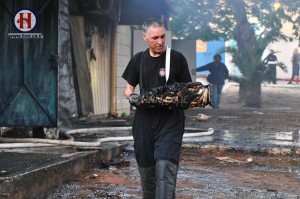 Eight sifrei torah were destroyed in a blaze that erupted in the Eitz Chaim Shul on Shai Street in Kiryat Ono on Shabbos at 18:00. The shul serves mispallalim who maintain their nusach from Turkey.

Mispallalim from a neighboring shul who were attending a shiur when they realized the fire broke out and summoned firefighters but despite their best efforts, they were unsuccessful in saving the sifrei torah. The fire simply spread to the aaron kodesh and the seforim were engulfed in the flames.

The sifrei torah from the neighboring shul were removed as firefighters feared the blaze would spread as it was burning out of control. Area residents were also evacuated from their homes and hazardous materials experts were summoned due to the large quantity of asbestos involved in the fire.

Bnei Brak fire official Chezi Tzefanya explained that his men first ran to save the sifrei torah, but it was simply impossible as the aaron kodesh was engulfed in flames.

In another shul blaze, in a shul on HaRif Street in Elad, firefighters succeeded in removing two sifrei torah from the aaron kodesh. The shul is in a caravan home which was totally destroyed, along with seforim but the sifrei torah were saved.

Fire marshals are inspecting both fires as to determine the cause.