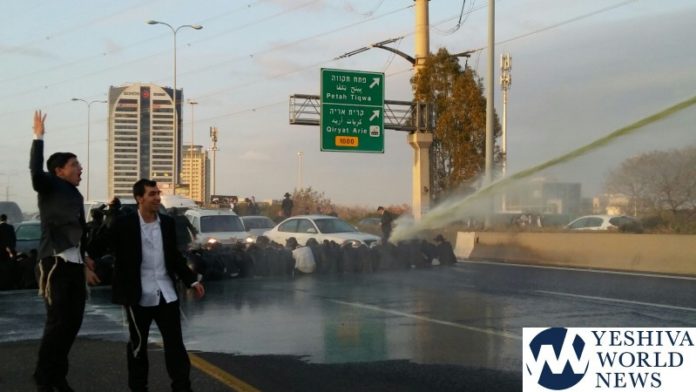 Incarcerated Yeshiva Bochur Meir Bordiansky issued a statement to his fellow Peleg friends in Yeshiva, that they should not write to him for very much “as whatever is written to him is read by his jailers, and that if anyone does want to write to him they should do so in Aramaic so that those running the jail would not understand.”

The statement was first publicized on Bichadrei Chareidim, who also publicized that Bordiansky has been incarcerated due to draft dodging his conscription notice and had refused to arrive at the conscription office to request a deferral for the past two years. The day after he was arrested, a large protest was held in Jerusalem by Peleg followers that shut down the entrance to the city for more than two hours.

A second protest was held on Monday, this time blocking Highway Four and Jabotinsky Street intersection near Petach Tikvah after it was announced that Brodiansky will remain incarcerated until the end of the legal proceedings against him.

The IDF Spokesperson’s Unit said that Brodiansky agreed to wear a uniform in prison, in accordance with the law, and that there have not been any altercations and therefore is not being kept in solitary confinement.