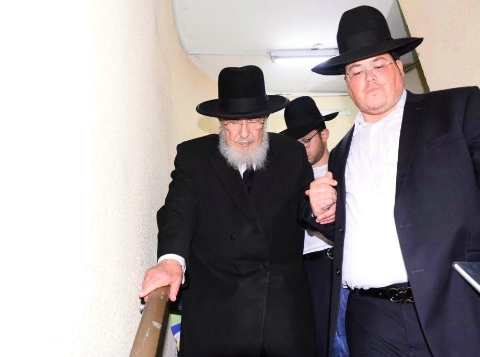 A wave of burglaries, cleverly carried out by thieves who leave no signs of break-ins or a trace, has been plaguing areas of the city of Bnei Brak in recent days.

On Tuesday, 4 Nissan, the Pinkas Street home of R’ Yaakov Grossbard, the trustee of the home of HaGaon HaRav Baruch Mordechai Ezrachi, a member of the Moetzas Gedolei HaTorah, was targeted while he was in the United States together with the Rosh Yeshiva.

Bechadrei Chareidim learned that the burglary took place during the morning. The thieves came up with the most sophisticated technology and left no signs of burglary that even the police forensic experts could not solve the mystery of where the burglars had entered.

The door of the house remained locked, they wore gloves and left no fingerprints. The thieves emptied the house of all the jewelry and valuables along with cash.

A preliminary investigation reveals that in recent days there have been several sophisticated burglaries on the same street in the same pattern, in the morning hours, leaving no traces and the owner of the apartment in each case was in the United States.

Frightened residents turned to Bechadrei Chareidim, laden with complaints about the police, who they believe do not care and cannot even provide a thread of evidence. “How can the women and girls stay alone at home and fear that every moment someone can enter the house” they say apprehensively.

Apparently, the thieves have an advanced key that has developed a simple and easy way to open every door, including a Rav Bariach (Multi lock).

Grossbard was in the United States with HaRav Ezrachi, who takes off during bein hazmanim to the USA and returns on erev Pesach to his home on the eve of the bedikas chametz.

After hearing what occurred, Rav Ezrachi instructed Grossbard to immediately return home and told him “I will return with you”, so that he would be able to assist in apprehending the dangerous burglars as quickly as possible and restore peace and quiet to the area.