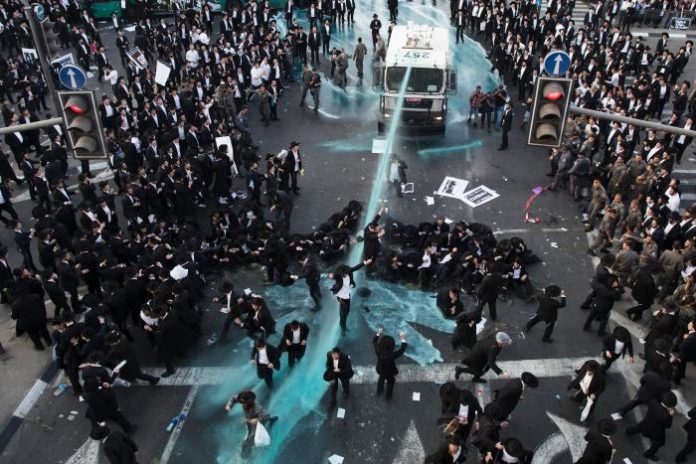 An online petition is being circulated against Israel Police for its “cruel” actions, using the ‘skunk’ smelling water against a crowd in Meah Shearim, citing protocol only permits using it in an open area.

Emails being sent to recipients’ state, “Please convey to any painful Jew who can join. After the horrific abuse perpetrated during Pesach in the Meah Shearim neighborhood of Jerusalem.

“In houses and passageways – against men, women and children, and even the faces of old men.”

In the continuation of one email, Israel Police are referred to a “Nazis Y”MS”.

In the recent demonstrations in the Meah Shearim area, the Israeli police used the “skunk” material that was sprayed inside residential neighborhoods, contrary to the police procedure, that “as a rule the liquid will be sprayed in open areas.”

While the role of the Israel Police is to maintain routine in the entire neighborhood, they accomplish just the opposite with the use of the stench in the neighborhood.

The injury is to all the residents of the neighborhood including elderly people and asthma patients. This is also contrary to the police procedure, which states that it is forbidden to spray at elderly pregnant women and infants, even after the time of the demonstrations.

We immediately demand that the commander who gave the order to use the skunk stench against the police procedures be held accountable and at the same time work to remove the smell from the neighborhood immediately.