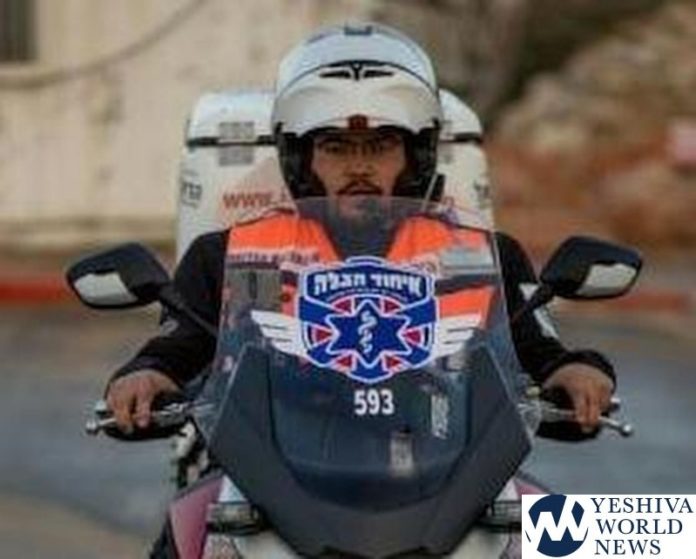 Two weeks ago at 8:30PM on Wednesday evening, Yehuda Hess received an alert to a serious road accident on the highway near Kedumim. Jumping on his ambucycle, Hess raced to the location. He quickly spotted a car in the shrubbery at the side of the road and pulled up right next to it.

Hess was dismayed to see his neighbor and friend slumped in the driver’s seat, his face covered with blood. Together with two additional United Hatzalah medics who arrived at the scene, Hess extricated the man from the wreckage and examined his injuries. The victim had sustained serious head and facial wounds. As the first responders stemmed the bleeding and bandaged the man’s head, they performed a field neurological assessment, asking the man questions and conversing with him. The disoriented man had no idea where he was, what time it was, or what had happened. His incoherent speech was further indicative of brain trauma.

Hess was gratified that he and the other volunteers were there, both to treat his neighbor and to ensure he received the definitive follow-up care he so desperately required.

“After 11 years of working as a first response EMT, and responding to thousands of calls, there are still some emergency calls that leave you with a different feeling afterward. Obviously, the ones where you actively save a person’s life leave more of an impression than those where you are simply called upon to help take someone’s blood pressure and bandage a small scrape. We navigate these emergency calls in our minds. I have been at hundreds of motor vehicle accidents over my career and most haven’t left a major impression. However, when you respond to a car accident and see that the person injured behind the wheel is your neighbor and friend, who is covered in blood, you go into a panic, a personal panic because you know the person,” said Hess.

“This situation got worse when I realized that he was confused due to his head injury. I saw the signs of mechanism of injury involved in the accident that pointed to a head injury and I understood that my neighbor’s confusion was coming from his head injury. He was speaking to me, but it was clear that he wasn’t all there. At first, he didn’t recognize me. I had to convince him to get in the ambulance because he didn’t want to get in for fear of being charged for the ride. However, he was moderately injured, and he needed an ambulance to take him to the hospital and get himself checked out. I was there for my friend and my neighbor and I am thankful that I was able to respond to this incident and convince him to get the help that he required. He is a dear friend of mine and had he not gotten himself checked out and treated in the hospital, which he wouldn’t have done had I not been there to convince him, then the damage would likely have been worse. Therefore, I am more thankful today than most others that United Hatzalah gave me the tools necessary to be there for my neighbor and friend.”

Photo Yehuda Hess on his ambucycle