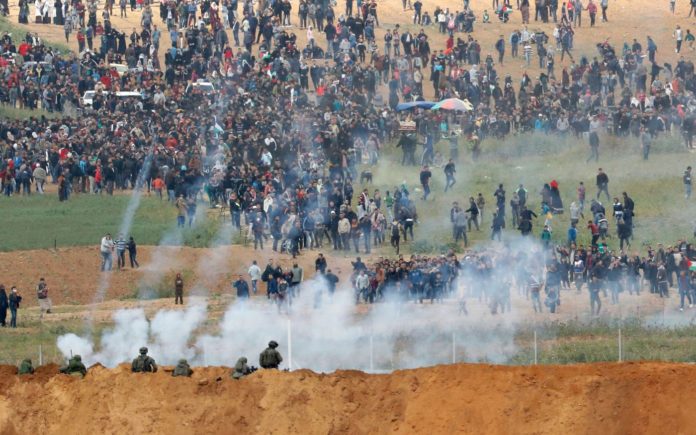 The Hamas terror group’s leader in the Gaza Strip on Thursday said protesters in a mass demonstration along the Israeli border next week will be unarmed and peaceful, but also compared them to a “starving tiger” and held out the possibility that tens of thousands of people could burst through the fence and swarm into Israel.

While Yehiyeh Sinwar repeatedly said he hopes to avoid bloodshed, he gave no indication that his group will try to hold back the expected large crowds — a scenario that could trigger a potentially lethal Israeli response.

In his first meeting with foreign press since taking office last year, Sinwar said residents of blockaded Gaza are so desperate their actions are impossible to predict. He also claimed that Israel’s borders are not internationally recognized and do not have to be respected.

Israel has said it will defend its border. It accuses Hamas of exploiting civilians and using the chaotic scenes to stage attacks. Israeli fire has killed 40 Palestinians and wounded some 1,700 since the protests began on March 30.

The Hamas-led demonstrations are aimed at breaking a crippling decade-long Israeli-Egyptian blockade, imposed after the group seized power in Gaza in 2007. Sinwar also said the demonstrations are also a protest against Monday’s planned move of the U.S. Embassy in Israel from Tel Aviv to contested Jerusalem.

The move is taking place on the 70th anniversary of Israel’s establishment – a date the Palestinians mark as their “nakba,” or catastrophe – over the displacement of hundreds of thousands of Palestinians who either fled or were forced from their homes.

Sinwar, who spent over two decades in Israeli prisons after being convicted in the killings of two Israeli soldiers, was released in a 2011 prisoner swap and quickly rose through the ranks of Hamas. Last year, he was elected as the group’s leader in its Gaza stronghold.

Israel and its Western allies consider Hamas, which seeks Israel’s destruction, a terrorist group – a label Sinwar staunchly rejected. He described it as a peaceful movement, but also defended what he called the “right to resist” Israeli occupation.

Yet he said that he has no desire to see any further bloodshed in the final days of what Hamas calls the “March of Return.” He repeatedly said the protests would be “purely peaceful” and protesters would be unarmed.

“The scene we hope to see on Monday and Tuesday is the less bloody one,” he said. “Things depend on the reaction of the (Israeli) occupation.”

Still, he said the conditions are so bad in Gaza that it is difficult to predict how people will behave. The blockade, which Israel says is needed to prevent Hamas from building its military capabilities, has decimated Gaza’s economy. Unemployment is approaching 50 percent, nearly all of its fresh water is undrinkable and residents receive just a few hours of electricity a day. He even claimed that some conditions in Israeli prison were better than conditions in Gaza.

“We went out to knock the wall of the prison and declare it clearly that we will not agree to die slowly,” he said.

He compared the situation to a “time bomb” that could go off any time unexpectedly and likened the territory to a “starving tiger” in a cage.

“No one knows where the tiger is heading, what it is going to do,” he said. The lights in the room went off several times during the meeting, prompting him to quip: “Welcome to Gaza.”

Israel and Hamas have vastly different visions of nonviolence. Protesters have hurled stones and burning tires at Israeli troops and repeatedly tried to damage and rip down the border fence.

Israel says its forces are defending a sovereign border and accuses Hamas of using civilians for cover while it tries to plot a border breach and attacks against its citizens.

But the U.N., the European Union and rights groups have accused Israel of using excessive force against unarmed protesters. Despite the criticism, Israel says its rules of engagement remain the same — setting the stage for potential bloodshed in the case of a massive border breach next week.

Speaking on other issues, Sinwar condemned Israeli airstrikes on what it says are Iranian military facilities in neighboring Syria and the U.S. walkout from the nuclear deal with Iran. “Any harming of an Arab or Islamic state hurts us,” he said.

But addressing fears that the U.S. withdrawal from the treaty would spark a proxy war in the Middle East, Sinwar ruled out that Hamas would be a part of such a war. “The interests of our people are not to be dragged into any war,” he said. He continued that he doesn’t think Iran needs Hamas’ limited resources.

Iran was a key backer of Hamas for many years. But relations turned cool after Hamas refused to join Iran in backing Syrian President Bashar Assad after civil war broke out in Syria in 2011. However, ties seem to be improving. “Iran supported us in a fantastic way and helped build our capabilities,” he said.

Sinwar also played down suggestions that his group, which has fought three wars against Israel, is tending toward nonviolence. He pledged to continue building Hamas’ arsenal, considering this as “a national duty.”

He rejected Israeli criticism that Hamas has wasted money digging attack tunnels and producing rockets instead of improving Gaza’s rundown infrastructure or quality of life.

“No single penny allocated for aid was taken for the military capabilities,” Sinwar said, adding that money for the movement’s well-organized armed wing “come for this purpose” from supporters he did not name.