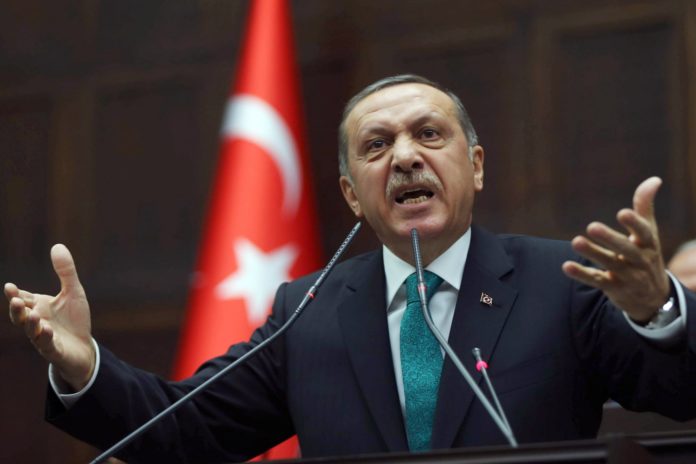 Turkish President Recep Tayyip Erdogan continues his anti-Israel diatribe, calling Israel a “terror state” a day after IDF soldiers prevented tens of thousands of violent Gazan protestors from trying to breach the border fence with Israel. According to reports from Gaza, 59 people were killed and at least 1,200 injured in violent border clashes initiated by Hamas on Monday.

In his reference to the events along the Gaza border, the Turkish leader used the word “genocide.” Turkey on Monday night also announced that it was recalling its ambassadors from both the United States and Israel for “consultations”.

Thousands of people took part in a protest in Istanbul against the United States following the ceremony marking the re-location of the US embassy from Tel Aviv to Jerusalem, undermining PA claims that Jerusalem is the capital of Palestine.

In his interview with Bloomberg News, Erdogan explained “Two people are responsible” for recent events, pointing the finger of blame at President Donald Trump and Prime Minister Binyamin Netanyahu. Seeking to fuel the anti-Israel sentiment, Erdogan has called for an urgent meeting of the 57 states which comprise the Organization of Islamic Cooperation, which happens to be chaired by Turkey. He vowed that Islamic leaders would not permit the loss of Jerusalem, vowing to remain at the side of “our Palestinian brothers”.

Netanyahu is the PM of an apartheid state that has occupied a defenseless people’s lands for 60+ yrs in violation of UN resolutions.

He has the blood of Palestinians on his hands and can’t cover up crimes by attacking Turkey.

Want a lesson in humanity? Read the 10 commandments.

Hamas is not a terrorist organization and Palestinians are not terrorists.

It is a resistance movement that defends the Palestinian homeland against an occupying power.

The world stands in solidarity with the people of Palestine against their oppressors.

Turkey’s Prime Minister, Binali Yıldırım, referred to Israel’s actions as “a cowardly massacre”. He too criticized the decision to move the US embassy, accusing the United State of “flaunting international law”.

In response to Erdogan’s comments, Prime Minister Binyamin Netanyahu said, “Erdogan is among Hamas’ biggest supporters and there is no doubt that he well understands terrorism and slaughter. I suggest that he not preach morality to us.”

A man whose hands are drenched in the blood of countless Kurdish civilians in Turkey and Syria is the last one who can preach to us about military ethics.

Prime Minister Benjamin Netanyahu: “Erdogan is among Hamas’s biggest supporters and there is no doubt that he well understands terrorism and slaughter. I suggest that he not preach morality to us.”

Some other reactions to the Gaza violence includes South Africa; which has recalled its ambassador from Tel Aviv to “explain the situation”. Ireland’s state radio has called for an “independent international probe headed by the United Nations” into the Gaza violence and deaths, while Australia on the other hand blames the deaths on Hamas.

Prime Minister Netanyahu thanked German Chancellor Merkel for condemning Iran's aggression and for her support of Israel's right to defend its sovereignty.

Prime Minister Netanyahu also spoke with French President Emmanuel Macron and said that Israel would maintain its security interests and emphasized that no country would countenance threats to its sovereignty.