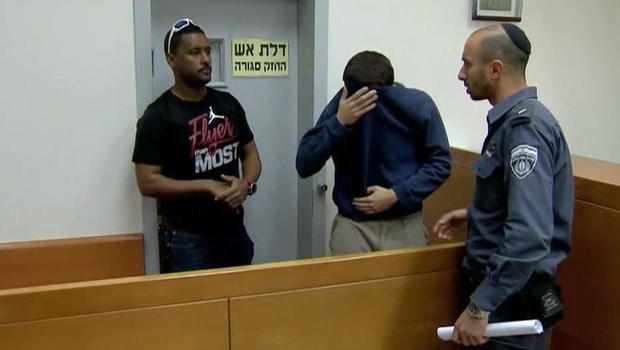 An Israeli court on Thursday convicted a Jewish Israeli man on charges including extortion for making a string of bomb threats targeting U.S. Jewish community centers, airlines and shopping malls — capping a case that had raised fears of a wave of anti-Semitism in the United States.

The Tel Aviv district court did not identify the man because he was a teen when he committed the crimes. But a separate U.S. indictment has identified him as Michael Ron David Kadar, a dual American-Israeli citizen.

Kadar’s arrest in March 2017 followed a trans-Atlantic investigation with the FBI and other international law enforcement agencies.

Police said the 19-year-old, from southern Israel, used advanced technologies to mask the origin of his calls and communications to synagogues, community buildings and public venues.

In early 2017, there were dozens of bomb threats against Jewish community centers and day schools across the U.S. and in Canada, according to the Anti-Defamation League, a Jewish group that battles anti-Semitism. The threats led to evacuations, sent a chill through local Jewish communities and raised fears of rising anti-Semitism.

The Israeli indictment said that besides the Jewish centers, Kadar also targeted airports, malls, police stations and Republican state Sen. Ernesto Lopez from Delaware. He also offered his intimidation services over the internet in return for compensation in Bitcoin.

In all, Kadar was accused of making over 2,000 threats.

Among the allegations in the Israeli indictment were making a bomb threat against an El-Al flight to Israel that sparked fighter jets to be scrambled, and threatening a Canadian airport, which required passengers to disembark on emergency slides. Six people were injured. He was also accused of threatening a Virgin flight that as a result dumped eight tons of fuel over the ocean before landing, and threatening a plane being used by the NBA’s Boston Celtics.

According to court documents, the defense claimed the suspect was mentally ill and had acted out of boredom.

While finding him to be on the autism spectrum, the court said there were no signs of mental illness. It said he was highly intelligent and had gone to great lengths to cover up his acts, proving he understood right from wrong.

Police had said he used sophisticated “camouflage technologies” to disguise his voice and mask his location. They said a search of his home uncovered antennas and satellite equipment.

The judge wrote that investigators had determined the young man enjoyed making people panic and putting them in fear and stress.

Prosecutor Yoni Hadad said Kadar was convicted on charges including extortion, publishing false information, money laundering and violations of computer laws. “He caused panic and terrorized many people, and disrupted their lives,” he said.

It wasn’t immediately clear when Kadar would be sentenced or how much time behind bars he could face.

Defense lawyer Yoram Sheftel said his client was the first person with autism to be put on trial in Israel. “Our courts keep expanding the scope of convictions,” he said.

In the U.S., Kadar also faces federal hate crimes, bomb threats, hoax and cyberstalking charges that could potentially put him behind bars for decades, according to an indictment issued in February. Israel has reportedly refused a U.S. request for extradition.

In a separate case, a U.S. federal court sentenced Juan Thompson, a former journalist from St. Louis, to five years in prison for threatening Jewish organizations as part of a cyberstalking case against a former girlfriend.