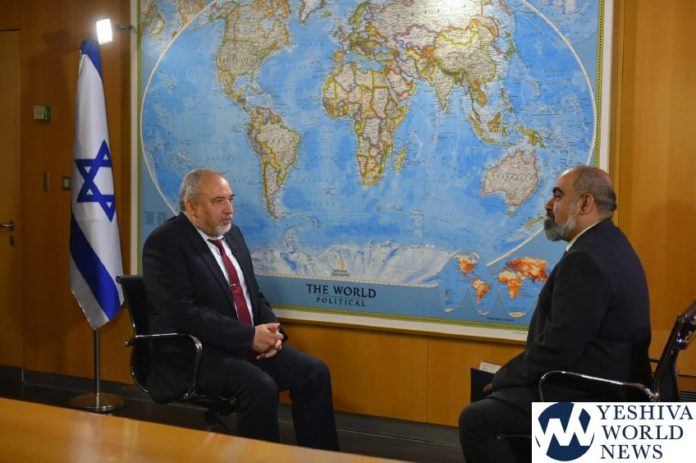 For the first time, a senior Iranian journalist came to Israel for an interview with Defense Minister Avigdor Lieberman. The interview took place this week at the Defense Ministry in Tel Aviv. The interviewer is Mehrad Mirdamadi, who is the editor-in-chief of Radio Farda (Tomorrow in Farsi), which broadcasts from the city of Prague to tens of millions of Iranians. Radio Farda was founded in 2002 with the support of the American administration, to serve as a free media tool for Iranian citizens. It is considered one of the largest and most influential anti-government media outlets in Iran.

This is the first time an Iranian journalist has visited the defense minister’s office. In an interview in Persian and partly in English, which was published Thursday morning, 26 Elul, in Persian, on the Radio Farda website, the defense minister asked to convey a message to Iranian citizens. “We hope that our message is very clear, we will do everything to prevent any Iranian attempt to establish military bases in Syria or to bring in other Shi’ite militias that will threaten Israel,” said Defense Minister Lieberman. “Iran is a sovereign country and it has the right to maintain diplomatic and economic relations with Syria, but we will never agree to an Iranian military presence on Syrian soil and we will not accept Iran’s efforts to harm Israel and destabilize the Middle East,” Lieberman added.

Defense Minister Lieberman added: “Iran invests in terror instead of working for the younger generation, and instead of developing the economy and science. The Iranian regime invests only in military exercises and terrorism, and spends more than $ 2 billion each year on terror financing throughout the Middle East, against the interest of the Iranian people. Why is a country with the largest oil reserves in the world investing so much in a nuclear program and ballistic missile development? ”