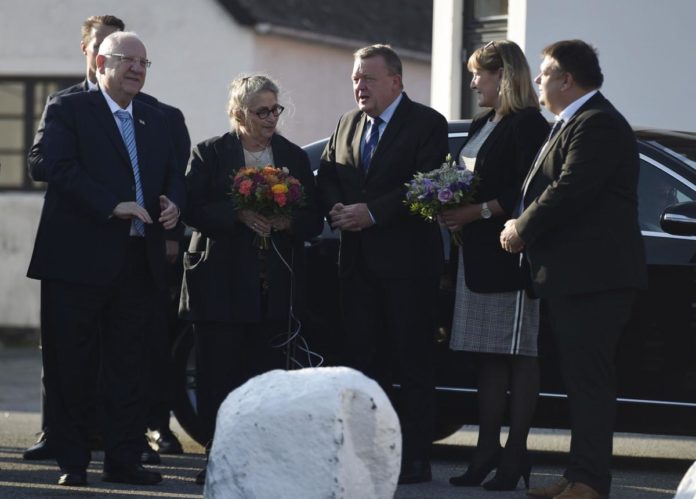 Israeli and Danish dignitaries on Thursday marked the 75th anniversary of the daring rescue of more than 7,000 Jews from Denmark by boat to neighboring Sweden during World War II.

Israeli President Reuven Rivlin and Danish Prime Minister Lars Loekke Rasmussen paid tribute to the events in 1943 in ceremonies at the small fishing town of Gilleleje, some 50 kilometers (31 miles) north of Copenhagen.

Denmark was occupied by Nazi Germany from April 1940 to May 1945, and it’s one of the few European countries whose Jewish population was largely saved from the Holocaust.

About 7,200 Jews, or 95 percent of Denmark’s Jewish population, and some 700 of their non-Jewish relatives managed to escape by crossing the narrow waterway from Gilleleje and other coastal spots to neutral Sweden in a risky rescue mission between September and October 1943.

Rivlin and Rasmussen laid wreaths at the town’s port Thursday, before attending a ceremony at Gilleleje’s 16th century church.

Some 80 Jews were hidden in the church’s attic while waiting for maritime transportation.

The two-week rescue mission was planned and carried out largely by local authorities and the Danish underground resistance movement. It was made possible after a tip on Nazi raids on Jews from Georg Ferdinand Duckwitz, a German diplomat and attache based in Copenhagen who’s still referred by Danes as “the good German.”

About 500 Jews were arrested in Nazi raids and deported to concentration camps.