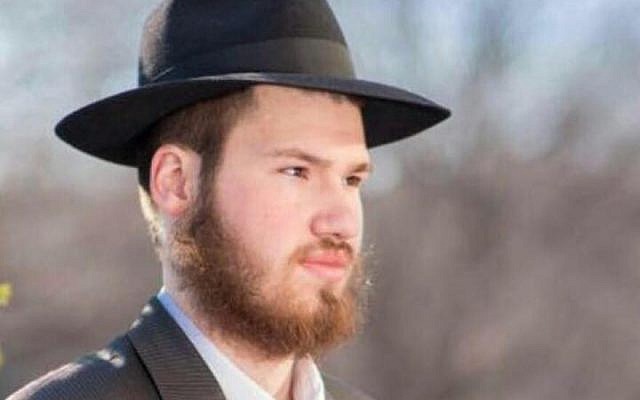 Walk into the Jewel-Osco supermarket in Chicago, and right between the organic fruit and the kosher meat counter sits a small, round display table. Instead of produce or products, it bears a few photographs, sheets of paper and a box.

It is into that box that shoppers, staff and community members have been depositing their memories of Eliyahu Moscowitz, a 24-year-old kosher supervisor who was murdered on Simchat Torah while walking in a park. It was the second random shooting by the same gunman, who remains on the loose.

With a ready smile and sharp sense of humor, Moscowitz (also known as Eli) was a fixture in the supermarket and the city.

Born to Rabbi Mendel and Chanie Moscowitz, both longtime teachers at local Cheder Lubavitch Hebrew Day School, Eliyahu grew up ensconced in an extended family that has been integral to the fabric of Chabad life in Chicago for nearly a century.

Thoughtful and wise, even in his adolescence he displayed a maturity beyond his years. “He was probably no more than 14 years old at the time,” recalls Marvin Berman, his family dentist, with whom Eliyahu would always don tefillin before his dental work. “I asked him how a person can believe in G‑d in the face of tragedy, and he gave me a talk on the true meaning of faith. It was very mature, but he had a sweetness about him that we all felt. Eliyahu meant something to us in the office. He was a nice person with a great sense of humor.” Berman pointed out that the non-Jewish associates in his office had similar experiences to his own.

#Chicago's #Jewish community remains on edge as the masked man who mysteriously shot and killed 24-year-old Eliyahu Moscowitz was in Rogers Park on Simchas Torah remains at large. The day before, 73-year-old man Douglass Watts was also shot in the head by the same suspect as he walked his dog in Rogers Park. The reward for the capture of the gunman is up to $16,000. The city's office of the Bureau of Alcohol, Tobacco, Firearms and Explosives added $5,000 to the reward for information about the suspect, the agency announced Saturday. The ATF portion of the reward is in addition to $10,000 and $1,000 offered by Jewish Federation of Metro Chicago and Cook County Crime Stoppers, respectively.

In Jewel, he was a beloved and well-liked presence, greeting patrons with a smile and always happy to help.

“I was loading my car in the Jewel parking lot, and there was an older man who was struggling with his packages,” recalls local resident Rabbi Levi Bukiet. “Of all the people whizzing by, Eliyahu was the one who got off his bike and helped the man pack his car. That’s just how he was, noticing people, always with a smile.”

A Heart of Gold

“Eliyahu had a heart of gold,” recalls Rabbi Shloimi Minkowicz, formerly a fellow mashgiach at Jewel. “He would take the shirt off his back in the freezing cold if he knew someone needed it. Eliyahu made every person, especially customers, feel special, like they were his friend.”

“You could talk to him about anything, personal issues or whatever was on your mind,” continues Minkowicz, “and you knew that you would come away feeling better, happier and wiser.”

The funeral and shiva home attracted hundreds of visitors, Jewish and non-Jewish, who had been touched by Moscowitz’s sweetness and concern.

“I have known Eli for at last 20 years,” shared the UPS driver who regularly serviced the Moscowitz home. “I just spoke to him on Saturday night when he was on his bike. We joked, and he asked me how I liked my new truck. I used to call him ‘brother.’ We said goodbye, and that was it. If he saw a joke about UPS, he would share it with me. He was a heartwarming, smart kid. My heart goes out.”

“We are all shaken by the tragic death,” stated Rabbi Boruch Hertz of Congregation Bnei Ruven. “His parents and siblings, as well as the grandparents and extended family, are in our tefilos and thoughts. This is a time for our community to help the family to overcome their pain.”

On Thursday, Oct. 11, community members will gather for an evening of inspiration at Congregation Bnei Ruven. Hertz will be joined at the podium by Rabbi Yona Reiss, Av Beth Din of the Chicago Rabbinical Council; Rabbi Meir Moscowitz, head emissary to Illinois; and Rabbi Yosef Y. Jacobson.

The The Federal Bureau of Alcohol, Tobacco, and Firearms announced an additional $5,000 reward for information about the murderer. Rogers Park Builders Group added $5,000 to $10,000 offered by the Jewish Federation of Metropolitan Chicago and $1,000 from the Cook County Crime Stoppers for a total of $21,000 in reward money.

Chicago police said 40 detectives, along with agents from the FBI and Bureau of Alcohol, Tobacco and Firearms, are searching for the man seen in a surveillance video around the time of the murder. At one point the masked man is seen jogging down an alley with his feet pointed outward.