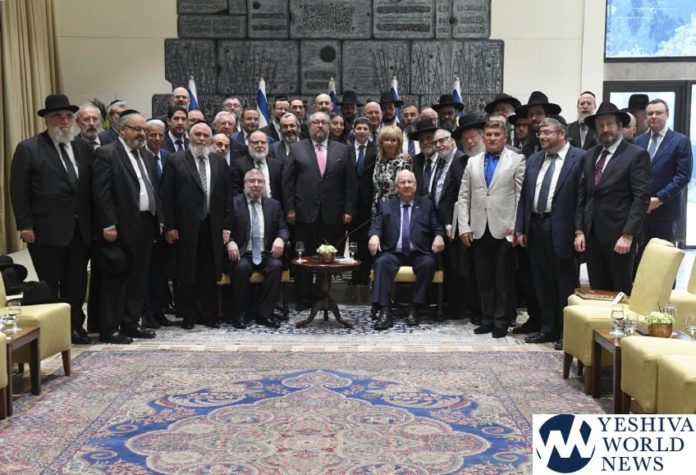 President Reuven Rivlin on Tuesday, 12 Kislev, met the heads of the Conference of European Rabbis, the main Orthodox rabbinical alliance in Europe, which includes the heads of more than 700 communities. The Conference was established in 1956 by Chief Rabbi of Great Britain and the Commonwealth Rabbi Sir Israel Brodie, to revive the Jewish communities of Europe after the Second World War. Today, the organization works to strengthen cooperation on global Jewish issues.

The Conference of European Rabbis is in Israel for the country’s 70th anniversary, to strengthen the connections between Israel and Europe, and to voice their concerns about acts of anti-Semitic terrorism. The delegation is headed by Chief Rabbi of Moscow Rabbi Pinchas Goldschmidt, President of the CER.

At the beginning of his remarks, President Rivlin talked about Jewish life in Europe today and the important work of the rabbis: “You live in an environment where Jewish identity is not to be taken for granted, and which can sometimes be hostile. In many ways you are on the front line and we have much to learn from you.” He also told the rabbis “you talk and build bridges with religious leaders – Christians, Muslims and others. You fight against anti-Semitism and at the same time you strengthen Jewish identity – and that is undoubtedly a complex challenge.”

At the end of the meeting, the president was presented with three volumes of halacha translated into Russian, a project of the CER to make Jewish learning accessible to Russian-speakers.