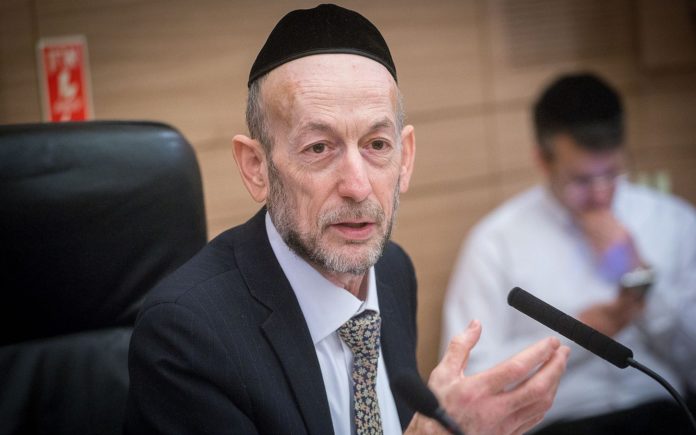 During a session of the Knesset Science & Technology Committee on Monday, 18 Kislev, a committee chaired by Maklev, that accusation was mentioned once again. Maklev was quick to defend Deri, explaining his words were not interpreted correctly, clarifying “I know exactly what he said, and it is not what was reported”. Meretz party chairwoman MK Tamar Zandberg was not hearing any explanation and joined in the attack against Deri. Maklev explained “He said, ‘The chareidim are not united and this is the work of the Satan’ and nothing more. He did not call anyone Satan”.

The session of the committee was to be focusing on the recent municipal elections and the issues that arose including the fake news reports surrounding the election, anonymous campaign robot phone calls, SMS texts and more.

The representative of the computer company, which provided the services to Degel Hatorah headquarters, presented the incident on the day of the elections: “There was a sophisticated attack, the staff received 75,000 calls in five hours, 300 calls a minute, from different numbers. To produce a very sophisticated attack, which was difficult for us to deal with.

He also detailed the activities that were carried out and said that during the election day, tens of thousands of calls were launched to designated lines, enabling the systems to continue operating as planned.

At the height of the discussion, a sharp argument developed in which Berkowitz’s representative tried to claim that there were those who acted dishonestly and disseminated false information. According to him, people distributed videos among the city’s Jewish population, in which vehicles were branded as the vehicle of Berkowitz’s staff in the Arab centers, in order to spread a lie, as if he was selling the city out to the Arabs.

In addition, there was information connecting Berkowitz to the New Israel Fund, which Berkowitz adamantly denied. Committee Chairman Maklev did not restrain himself, and attacked back: “How do you talk about spreading lies, when the entire election campaign you spread one major lie, announcing you know that Leon is a controlled puppet of ministers Deri and MK Gafni, and that he is selling the city to the chareidim”