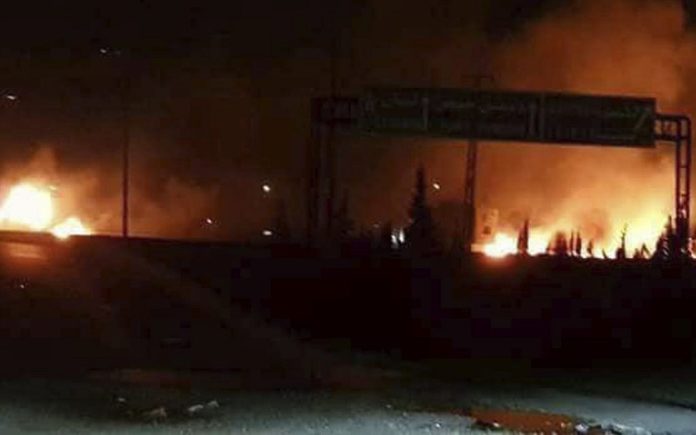 Syria’s air defenses confronted an aerial “aggression” over the country’s south late Thursday, shooting down several targets and preventing them from carrying out their mission in the first such attack since Syria received a Russian air defense system last month, state TV said.

The report said among the areas hit was the countryside of Kisweh, home to military bases, just south of Damascus. It was not immediately clear who was behind the attack but Israel has carried out dozens of airstrikes on Syria over the past years.

The incident occurred just a few hours after an Iranian plane landed in Beirut. The aircraft that landed was a Boeing 747 jet from Iranian Airlines Fars Air Qeshm. It is suspected that the airline carries weapons from Iran to Syria. The plane made an unexpected landing in Beirut. The airline is identified as being in the service of the Iranian Revolutionary Guard.

The IAF had attacked the area numerous times in the past year. The IDF Chief of Staff Gadi Eizenkot was attending the ceremony of outgoing Police Chief Roni Alsheich in Beit Shemesh when the reports were coming out of Syria.

The Syrian Observatory for Human Rights, a war monitor linked to the opposition, said Israeli missiles targeted areas just south of Damascus all the way to the Qunaitra region on the edge of the Israeli-occupied Golan Heights.

Russia’s RIA news agency cited a Syrian security source as saying that the “Syrian air defense forces shot down an Israeli war plane and four missiles.” In addition, Syrian state television reported that “the Israeli attack did not achieve its goals because the hostile targets were shot down.”

The attack was the first since Russia announced last month that it had delivered the S-300 air defense system to Syria. That came after the Sept. 17 downing of a Russian reconnaissance plane by Syrian forces responding to an Israeli airstrike, a friendly fire incident that stoked regional tensions.

Russia is a key ally of Syrian President Bashar Assad, and its intervention in the civil war, beginning in 2015, turned the tide in his favor.

There was no immediate comment from Israel, which almost never confirms or denies airstrikes in Syria. Such attacks have become more frequent recently, amid soaring tensions between regional archenemies Israel and Iran.

Israel is widely believed to have been behind a series of airstrikes mainly targeting Iranian and Hezbollah forces in Syria that have joined the country’s war fighting alongside the government.

Israeli Prime Minister Binyamin Netanyahu has previously warned the United Nations that he has uncovered intelligence information that state that Iran has instructed the Hezbollah in Lebanon to build secret missile silos for pinpoint accurate missiles that would be able to strike deep into the heart of Israel with an accuracy of a few meters.