At his visit to the family home of Mor-Yosef in Ashkelon, the president met Yuval’s family. From his words to the family: “We have come to mourn the passing of a guard of Israel’s birders. A true hero who knew to hold on to his identity and to keep us safe, understanding that only we can protect our own home. Yuval led his life in a way that was truly inspiring, bore a name that is so deeply rooted and connected to our young country and fell in the line of duty to ensure our security.”

The president heard about Yuval’s special character from his family, about his generosity and kindheartedness, and said “I know how deep the pain is. We have to keep our country safe because no one else can do it for is.”

In his conversation with the parents of Yuval, the president said, “I go from house to house and mourn our fallen sons and in every house, I encounter the most profound dedication.” The president told the family about his meeting with soldiers from the chareidi Netzach Yehuda Brigade who came to light Chanukah candles just recently at the President’s Residence and said “I have visited Yuval’s unit several times, met his comrades time and again. They are impressive and professional soldiers who share the burden, with total dedication, and maintain their identity and values without compromise.”

Afterwards, the president visited the family of Yosef Cohen, in Jerusalem. The president shared his memories of the War of Independence with Yossi’s family, saying “when we defended our homes there was not a single Jerusalemite who did not play his part. The shells fell in Rechavia and in Shaare Chessed and in Meah Shearim indiscriminately, and we stood as a protective wall to defend our homes, religious and secular and today you are proving to us that we all know how to take part in defending our people, and at the same time to protect our identity.”

The president spoke to the step-father of Yossi about the touching things he said regarding the need for Jewish unity, in good times and in bad, and added “the things you said, dear father, touched my heart. One single fate put us here and we have to stand together in order to protect our country. We have the great honor to be parents and teachers of children like your son.”

The president heard from Yossi’s brother about his special nature and his wonderful ability to speak to everyone, whoever they may be, and to find real connection, understanding and partnership. The president took him to his heart and asked him to continue in his brother’s special way, because this is the key to continuing our lives here.”

The president left the family with great sadness and prayers that they would meet soon on happy occasions. 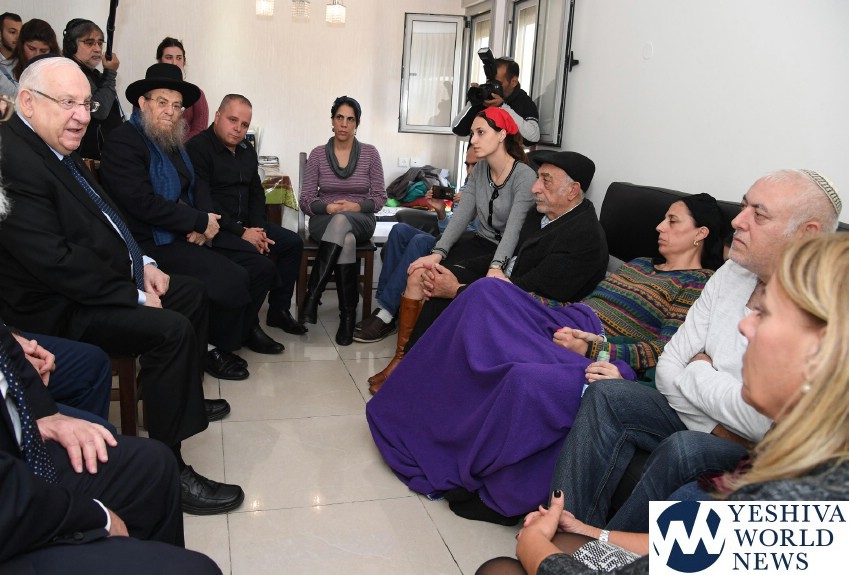