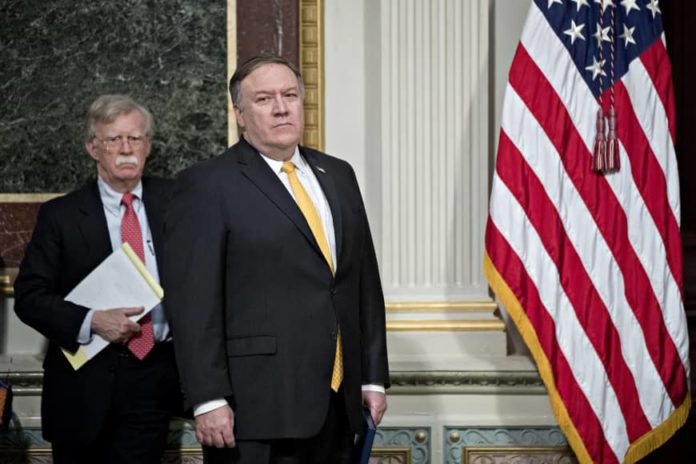 Secretary of State Mike Pompeo and national security adviser John Bolton are hoping their trips to the Middle East can help shore up support from America’s partners amid increasing tensions in the region.

In his first Mideast visit since President Donald Trump’s recent announcement that he intends to withdraw U.S. forces from Syria, Pompeo will stop in eight countries, starting with Jordan on Wednesday, the State Department said. Bolton planned to depart Friday for Israel and Turkey, his spokesman said.

The Syria decision, which led to the resignations of Defense Secretary Jim Mattis and the U.S. special envoy for the anti-ISIS coalition, is expected to dominate the officials’ agenda, along with the Trump administration’s hard line on Iran, the conflict in Yemen and the situation in Iraq.

The Trump-ordered withdrawal of U.S. troops in Syria was initially expected to be completed within weeks, but has been slowed as the president has acceded to requests from aides, allies and members of Congress for a more orderly pullout. The U.S. drawdown is feared to clear the way for a Turkish assault on Kurdish fighters in Syria who have fought alongside American troops against ISIS.

In addition to Jordan, Pompeo plans stops in Egypt, Bahrain, the United Arab Emirates, Qatar, Saudi Arabia, Oman and Kuwait. The U.S. hopes each country will play a significant role in a planned regional strategic partnership being called an “Arab NATO.”

Bolton also will focus on Syria and “how the U.S. will work with allies and partners to prevent the resurgence of ISIS, stand fast with those who fought with us against ISIS, and counter Iranian malign behavior in the region,” according to National Security Council spokesman Garrett Marquis.

Bolton was scheduled to meet with Israeli Prime Minister Benjamin Netanyahu before being joined in Turkey by the chairman of the Joint Chiefs of Staff, Gen. Joseph Dunford. They are expected to pressure Turkish officials not to launch an offensive targeting Kurdish fights in Syria.

Turkey considers the Kurdish People’s Protection Units, or YPG, a terrorist group linked to an insurgency within its own borders.

Pompeo told Newsmax Thursday that “ensuring that the Turks don’t slaughter the Kurds” was part “of the American mission set,” a comment that Turkey said showed a lack of information about the situation.

After a brief stop in Amman, Pompeo will fly to Cairo for counterterrorism and energy cooperation talks with Egyptian officials and to give a speech on the U.S. “commitment to peace, prosperity, stability, and security in the Middle East,” the State Department said. The speech is expected to be a counterpoint to an address that President Barack Obama delivered in Cairo in 2009 in which he sought to reach out to the Muslim world.

From Cairo, Pompeo heads to Manama, Bahrain, home to the U.S. Navy’s 5th Fleet, to continue discussions on the Middle East Strategic Alliance that is aimed at confronting Iran’s increasing assertiveness in the Persian Gulf.

Pompeo will then visit Abu Dhabi, where he will push for all parties to the conflict in Yemen to follow through on de-escalation agreements they reached at U.N.-brokered peace talks in Sweden last month. The Emirates are Saudi Arabia’s main partner in a coalition fighting Iranian-backed Houthi rebels in Yemen.

The UAE is also at the center of a festering dispute involving most of the Gulf Arab nations and Qatar, which will be Pompeo’s next stop. In Doha, the secretary plans to underscore the importance the U.S. places on Gulf unity in standing up against Iran. Qatar has been subject to a blockade by its neighbors, including Saudi Arabia and the Emirates, which accuse it of supporting terrorism, since June 2017.

From Doha, Pompeo will travel to Riyadh for talks with Saudi officials about Yemen, Iran and Syria as well as the investigation into the murder of Saudi journalist Jamal Khashoggi. The Washington Post contributor was killed at the Saudi Consulate in Istanbul in October.

Earlier this week, Saudi prosecutors announced they would seek the death penalty against five of 11 suspects Khashoggi’s slaying, in which members of Crown Prince Mohammed bin Salman’s entourage have been implicated.

Pompeo will wrap up his tour with stops in Muscat, Oman, and Kuwait City.

In the Friday call, Putin and Netanyahu “focused on developments in Syria, including in light of the United States’ stated intention to withdraw its troops from that country. They pointed to the need for the final defeat of terrorism and speedy achievement of a political settlement in Syria,” a Kremlin statement said.

Netanyahu also offered condolences following an apartment building collapse in the Russian city of Magnitogorsk this week that killed 39 people, the statement said.