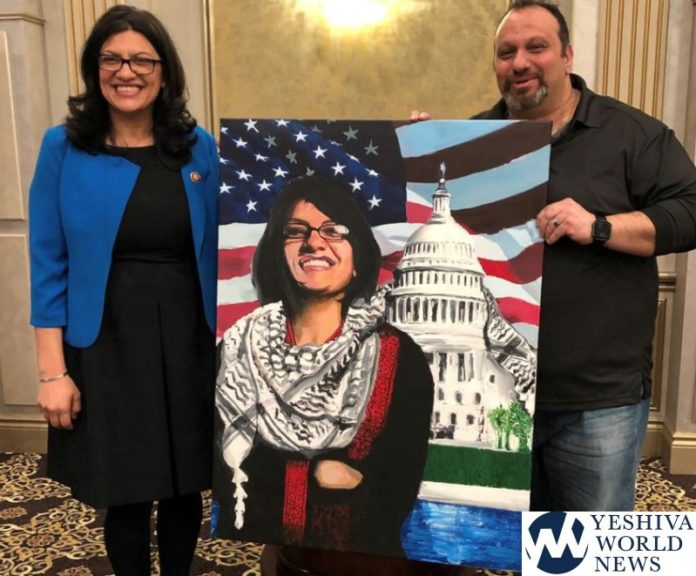 She has only been in office for two weeks, but newly elected Rep. Rashida Tlaib (D-MI) continues to make headlines.

Tlaib is the daughter of Palestinian immigrants and became one of the first female Muslim members of Congress this month. She has vowed to vote against all US aid for Israel. She was seen at her victory party wrapped in a Palestinian flag. She has also campaigned with another newly elected Muslim congresswoman who has called Israel an “apartheid regime”.

Most recently Tlaib made national headlines just hours after being sworn in, when she used horrible profanity to describe President Donald Trump when promising her 13-year-old son that he would be impeached.

But today she made headlines that people were likely expecting from her.

A well-known anti-Semite and terrorist supporter named Abbas Hamideh tweeted out a photo of himself with the Congresswoman which has since gone viral and is making headlines.

Abbas Hamideh is the executive director of the “U.S.-based Palestine Right to Return Coalition”. He has a long hateful history of calling Israel a “terrorist entity,” has equated Zionists to Nazis, said Israel has a “delusional ISIS-like ideology,” and called the creation of the country a “crime.”

Hamideh has praised arch-terrorist Hassan Nasrallah, the leader of the Hezbollah Terrorist Organization in Lebanon. Hezbollah has been designated a terrorist organization by the United States and other nations.

I was honored to be at Congresswoman @RashidaTlaib swearing in ceremony in #Detroit and private dinner afterward with the entire family, friends and activists across the country. #Palestine #TweetYourThobe #RashidaTlaib pic.twitter.com/caJPN12ODX

HERE ARE JUST A SMALL SAMPLE OF HIS TWEETS:

israel does not have a right to exist. The terrorist entity is illegal and has no basis to exist other than a delusional ISIS like ideology.

Inviting a Hezbollah fanboy to your private dinner is a bold move pic.twitter.com/Z21htJ2bnh

Yes, the Nazis are still around with a different name: Zionists! #Intifada pic.twitter.com/BvPNnJue2t

Are we done with Apartheid Week? I want to go back to calling israel a terrorist entity.

SOME TWEETS FROM TODAY:

REMINDER: The illegal terrorist entity of “israel” doesn’t have a right to exist on top of stolen Palestinian land, nor on top of the indigenous Palestinians it has massacred over 70 years. This includes the massacre of my ancestral Village of Deir Yassin. No stuttering there. 🇵🇸

You would think all this massive digging up of tweets would be something offensive or outrageous. Remember, I don’t post or say anything I don’t mean. So, by all means please keep spreading awareness. I’m an activist not a politician. Keep digging❤️

Instead of having seizures about a picture with a congresswoman here’s what you should be having a fit about: Abdul Raouf Salha a 14 year old Palestinian child has died today of his wounds sustained last Friday in #Gaza by terrorist murderers of the israeli occupation. #Palestine pic.twitter.com/w4YFjgnlgH

I’m willing to go back to my country #Palestine if the Zionist terrorists go back to Poland. Deal? Let’s get that ball rolling ASAP. Get off Twitter and let’s make that happen.

LOOK: Anti-Semite #terrorist-sympathizer Linda Sarsour (2nd from left) seen with #Palestinian-born Congresswoman Rashida Tlaib (2nd from right) after she was sworn into office (whioenwearing a traditional Palestinian gown). Also seen is the map hanging in her office, with a slight alteration… #rashidatlaib #israel #palestine #palestinians