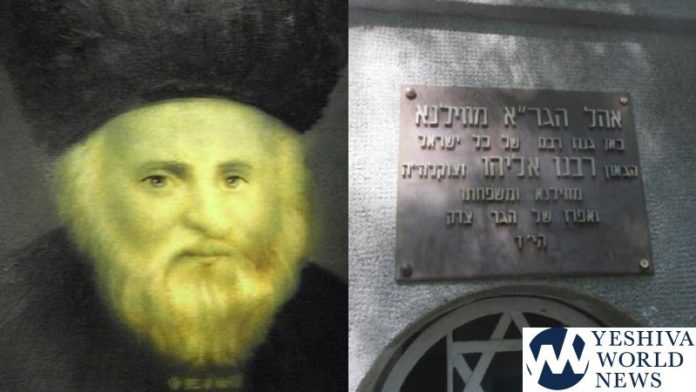 Lithuania said Friday it has rejected a request from Prime Minister Benjamin Netanyahu to move the remains of the Vilna Gaon from Vilnius to Israel for reburial.

The issue was raised during talks between Netanyahu and his Lithuanian counterpart Saulius Skvernelis in Jerusalem on Tuesday, Skvernelis’ national security advisor Arnoldas Pikzirnis told AFP.

“We received a kind request to consider whether the remains of the Vilna Gaon could be relocated to Israel,” Pikzirnis said.

The request was denied, he said, because “Vilna Gaon is an inseparable part of Lithuania’s Jewish community and Lithuania history.”

Jewish community leader Faina Kukliansky, who also attended the Jerusalem talks, told AFP that removing the rabbi’s remains from Vilnius was “out of the question.”

Kukliansky said the legacy of rabbi and scholar Elijah ben Shlomo Zalman, known as Vilna Gaon, was a crucial part of the history of Lithuania’s once thriving Jewish community.

Netanyahu first privately raised the idea when he visited Vilnius in August, a government source and a Jewish community source who met him during the trip told AFP.

A spokesman for Netanyahu in Jerusalem did not immediately comment.

Amir Maimon, Israel’s ambassador to Vilnius, also declined to comment but did not explicitly deny that Netanyahu made the request.

The Vilna Gaon spent most of his life in Vilnius, then a hub of Yiddish intellectual life known as the “Jerusalem of the North.”

He was Niftar in 1797 at the age of 77, and was buried in the Snipiskes cemetery in Vilnius.

His remains were moved to a new cemetery on the capital’s outskirts in the 1950s.