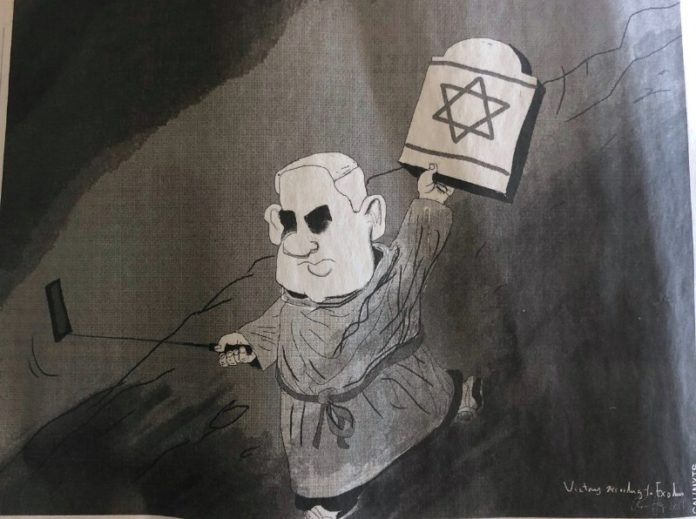 The new cartoon published on Monday shows Israeli Prime Minister Benjamin Netanyahu descending a mountain with a selfie-stick in one hand and a stone tablet with a Star of David in the other hand in its international edition.

This followed the earlier cartoon which showed Israeli Prime Minister Benjamin Netanyahu as a dachshund (dog) wearing a Star of David collar and leading a blind and skullcap-wearing U.S. President Donald Trump.

The Times first tweeted that the image “was offensive, and it was an error in judgment to publish it.” The statement added that the cartoon was provided by The New York Times News Service and Syndicate, which has since deleted it.

But that statement did not contain any apology, and the Times came under increasing criticism from many. They finally issued a statement saying they are “deeply sorry”.

It appears the NY Times was “deeply sorry” for around 24 hours until the next cartoon was published.

In case you are wondering what the @nytimes (antisemitic) cartoon (which replaced another antisemitic cartoon) is supposed to mean.

Here is the original cartoon from the same cartoonist before it was ’sanitised’ for the @nytimes.

Bibi is supposed to be Moses.

The New York Times has apologized for the terrible Anti-Semitic Cartoon, but they haven’t apologized to me for this or all of the Fake and Corrupt news they print on a daily basis. They have reached the lowest level of “journalism,” and certainly a low point in @nytimes history!

Wait…the ⁦@nytimes⁩ featured ANOTHER Netanyahu cartoon? This one AFTER the Thursday cartoon depicting Netanyahu as a dog? Am I reading this right? Is the Times obsessed with Israel’s prime minister? pic.twitter.com/r1KsSaYWtw

What we have here is a failure to communicate. The @nytimes doubles down with yet another bigoted antisemitic cartoon. After a weekend of public humiliation the NYT continues it's irrational & offensive campaign to demonize Israel & Jews. No more apologies necessary. We hear you. pic.twitter.com/qGO51kPD5n

So the @nytimes removed the original anti-Semitic cartoon and replaced it with a different (anti-semitic) cartoon two days later. pic.twitter.com/bBihm5VCej