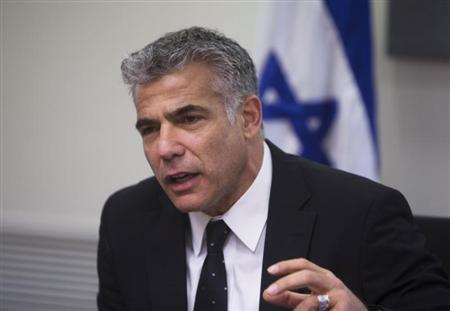 MK Yair Lapid and colleagues MKs Meir Cohen and Penina Tamanu of the Blue and White party visited the Phoenicia factory in Yerucham on Sunday.

The factory management explains that its glass burning ovens take too long to heat up and therefore, they cannot be shut down for Shabbos and as a result, the factory operates on Shabbos.

During the tour, and after a meeting with the plant’s CEO, Lapid said that “this is the first step on the way to a halachic state that must not be allowed to happen,” claiming that a boycott of Gerrer Chassidim led to the problematic situation of the plant.

Lapid added, “There is a serious threat to the entire industry in the south, before Negev Ceramics was closed, Amelia Cosmetic is in danger, and now Phoenicia is in danger of being closed. The reality is only due to one extreme chassidus that is beginning to lead to a boycott against the products because it is impossible to close the glass oven here on Shabbos”.

“There are 240 workers here, most of them wearing kippot and traditional persons. There is an attempt here to impose religious coercion that will cause the dismissal of workers and the closure of a factory in Israel, which is already suffering from the distress of employment and industry.”

“We must not allow this to happen. If we continue on this path, it will end with a public secular consumer boycott against the chareidim. Why do we need it? Since the 1930s there has been no reason to shut down the plant because of a consumer boycott.”

MK Michael Biton of the Blue and White Party was scheduled to participate in the tour, but had a change of heart because of the wording of the announcement that MKs will discuss with the management of the plant “difficulties encountered by the factory on the background of the cherem led by the Gerrer Chassidim.”

Biton said he read the call to join Lapid and decided he will visit the factory alone, just as he did when serving for a decade at the mayor.