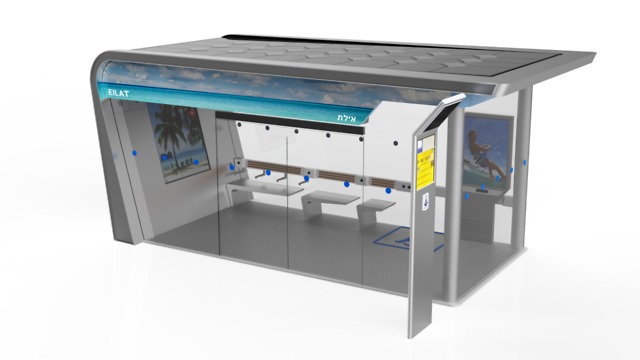 Towards the end of August, a bit late for this summer, a pilot project will be launched by the Ministry of Transportation in cooperation with the municipality and Egged, in which air-conditioned bus stations will be installed throughout Eilat. These are closed stations with automatic doors, which will also include interactive signage and a touch screen. The stations should also be accessible to people with disabilities.

The size of the station is 2.5 meters by 5.20 meters, with automatic sliding glass doors. Each station will have an air conditioner that will be set to a temperature of 23-26C (73-78F) degrees. At the station there will be a bulletin board with electronic information about the public transportation in the city and the lines that pass through the station, as well as information of the municipal tourism corporation and a bus travel smart card charging station.

The stations will be networked with cameras that broadcast directly to the municipal center, which is staffed 24 hours a day. The cost of each station is NIS 141,000 (financed by the Ministry of Transportation), and the cost of setting up each station is NIS 25-40,000. The air conditioner will work most of the day, except for certain hours of the night, when the station will also be closed.