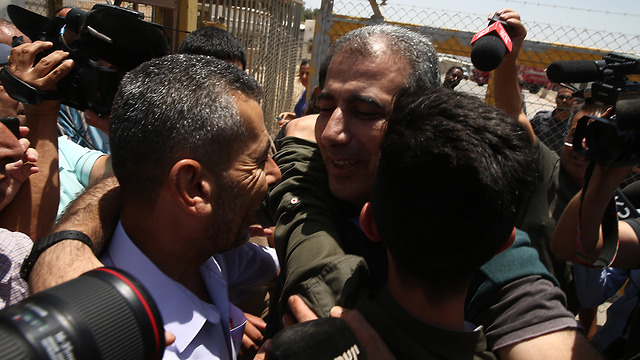 In a dramatic turn of events surrounding the case of the brutal and violent assault against a 7-year-old chareidi girl, Mahmud Qadusa, suspected in the alleged assault was released from custody and the accusations against him withdrawn by the Military Advocate General. He spent 55 days in jail as the investigation continued.

The prosecution on Tuesday morning announced that it is dropping the indictment against Qadusa, the Palestinian school janitor employed in the victim’s school, who has been claiming his innocence since his arrest. Many believe that Qadusa is innocent, and there is even a teacher who provides an alibi for him, that they were together when the attack reportedly occurred.

Qadusa embraced his relatives as he was released from custody and immediately declared his innocence.

“I’m innocent! I know myself. I was telling them the entire time that I’m not that person.”

“For seven years I’ve worked in that (Chareidi) city….I have Jewish friends there. They know me. Ask them what they think of me.”

In the dramatic statement released by the prosecution on Tuesday morning, it states “After further examination of the investigation material, the military prosecutor decided, in accordance with the position of all the professionals involved in handling the case, that the evidentiary basis of the indictment does not support ‘a reasonable chance of conviction’ at this time. Therefore, the criminal procedure, and the indictment, must be withdrawn, and Katusa released from detention”.

The military prosecutor continues, “The police investigation will continue with greater force, both in terms of its status and in other directions, with the aim of conducting an exhaustive investigation and reaching the truth. As additional evidence that establishes a new indictment against Katusa or against others is gathered, the process will continue”.

According to the Judge Advocate General’s Office: “In the course of the investigation, evidence was gathered that reinforced the suspicions against Qadusa beyond the testimony of the minor, including certain identification procedures and matching between details provided by the minor as well as other findings”.

“The Judge Advocate General also consulted with the State Attorney and senior officials, and at the end of the hearing it was decided, with the opinion of all of the participants, that there was room for completing the investigation, and after that it was proper to reevaluate the evidentiary basis of the indictment”.

Regarding the dramatic reversal of the indictment, it was said: “In addition, yesterday, the family of the minor updated her that she there was additional evidence, as well as ongoing investigative activity, including the taking of statements. At this stage, the results of these actions do not strengthen the evidentiary nature of the current proof against Qadusa”.

“According to all, there is a need to continue the investigation, using all possible means and probing all directions, including against Qadusa as well as taking it to other directions”.

In conclusion: “The bottom line is that regarding the evidence that exists in the case, the completion of the investigation will take place and all evidence examined. The Judge Advocate General has decided the prosecutor has not yet formed a reasonable chance of convicting Qadusa, and therefore, the JAG decided to withdraw the indictment and allow Israel Police to continue completing the investigation.