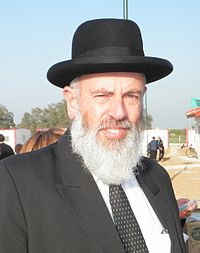 It is finally official, the candidacy of Dayan Rabbi Eliezer Igra for the post of Chief Rabbi . Rav Igra if the rav of Kfar Maimon and a dayan serving on the Chief Rabbinate Supreme Court. The rav stated “It is important that the chief rabbi is experienced in serving as a dayan on a beis din.”

While the rav signaled recently that he plans to enter the race, he finally did so officially. He obtained over 20 signatures from among the voting body of 120 and now he must submit his paperwork to the election committee.

Rav Igra, 59, is known to be close to Rishon L’Tzion Rav Shlomo Moshe Amar. He is said to be the first rav who wears a kippa sruga to seek a spot on the Chief Rabbinate Supreme Court. He was among the founders of Yishuv Psagot, its kollel, and served in the IDF Tank Corps.

The rav has a wealth of experience serving in the post of a dayan, and among the current candidates to become the next Ashkenazi Chief Rabbi, he is the only one currently serving in the capacity as a dayan at present.