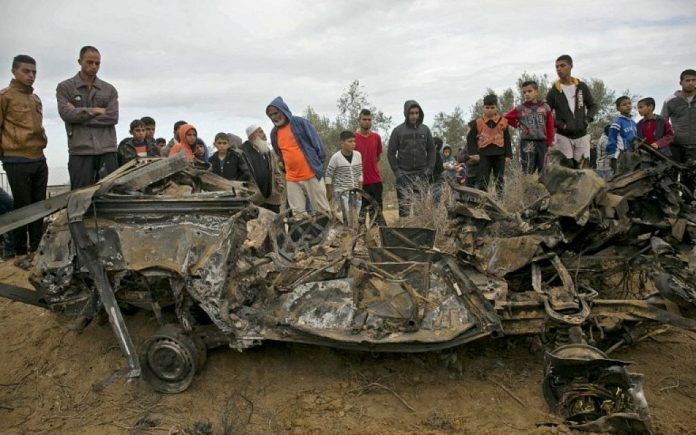 An Arab news report following an inquiry of the incident in which IDF Lt.-Colonel ‘M’ was killed a year ago, claims the soldiers entered Gaza in the hope of connecting to the Hamas communications channel.

The Qatari based Al-Jazeera report was released on Sunday, the probe into the IDF undercover operation which failed, in which Lt.-Colonel ‘M’ was killed and another officer wounded moderately-to-seriously.

The report claims the reason the undercover unit entered Gaza dressed as Arabs and carrying Palestinian identity cards was an attempt to connect to the Hamas communications system, a connect that required a physical contact.

Hamas commanders interviewed explained it is a closed network designed to prevent Israel from listening to terrorists and that there is a unit in Hamas that aims to monitor listening to the network.

According to the report, the soldiers, including two women, entered Gaza via an area not covered by security cameras, Al-Jazeera reported, entering before the Eretz Crossing disguised as humanitarian workers delivering medical assistance to those in need. Photos of one of them disguised as a German humanitarian worker including on a forged Palestinian identity card were shown in the report.

A voice recording was heard of the force after an exchange of gunfire with a Hamas officer who arrested them and demanded they identify themselves. In the recording, voices are heard speaking Hebrew against the background of handling the wounded and shooting guns with silencers. Among other things, a man who shouts in Hebrew several times heard “main artery! Main artery! apparently referring to the serious injury of one of the causalities. Subsequent recordings of an exchange of fire are heard at the moment when the air force began the bombing to allow the crew to flee back to Israeli territory.

The report also reveals a spy and listening facility exploded after it was discovered on one of Hamas’ military and engineering personnel. The terrorist who found the facility was killed as a result of the explosion. The report claims that the charge was exploded by a self-destruct mechanism that was triggered as the facility was exposed.

Last summer, the IDF released some of the findings of its investigation into the clandestine operation. It was reported that ‘M’ was killed by errant IDF fire and not from Hamas gunfire as first believed to have been the case. It was also revealed that the terrorist who discovered the facility was killed as a result of the blast.