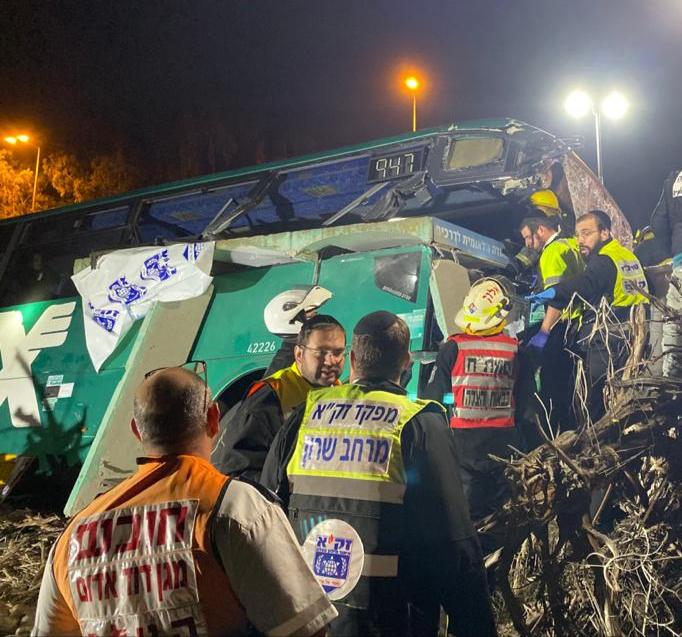 Among the dead in the horrific bus crash involving a number 947 bus traveling from Jerusalem to Haifa on Sunday night, the first night of Chanukah, were chareidim; a resident of Elad and a woman apparently from the north. The process of identifying the victims continued throughout the night and Monday.

The scene at the crash site, near Bedek Interchange in the area of Ben-Gurion Airport was a difficult one, and ZAKA volunteers operated on the scene ensuring kovod hameis for about four hours. Initial reports on Sunday night were of four dead and 18 injured in the crash, and it is now known that some of the dead were chareidim who began their trip from Jerusalem.

One of the dead is an Elad resident who in the past lived in Petach Tikvah. A woman, apparently a chareidi living in the north, was also on the bus along with two young women.

The 947 bus from Jerusalem to Haifa was traveling its regular route and a short while after El Al Junction, the driver lost control and slammed into a concrete hitching station and the roof of the bus was torn away by the concrete pillars, leading to the deaths R”L.

All the bodies were taken to the Abu Kabir Forensic Institute where efforts continue to make positive identifications, after which families will be notified.

The driver, a 44-year-old Haifa resident, was arrested and he was questioned while hospitalized in Beilinson Hospital. The driver is expected to be arraigned on Monday in a Rishon L’Tzion court and police will be asking that he be held without bail. Police are checking to determine if he was using his phone while operating the bus.

Three women and a man in their 30s and 50s were killed in the crash as the bus slammed into concrete pillars. 14 persons were injured according to police, including a 67-year-old woman and a 19-year-old girl, both listed in serious condition. The victims were transported to Sheba, Assaf HaRofeh, Beilinson and Sharon Hospitals. Five of the victims were released during the night from Assaf HaRofeh Hospital.