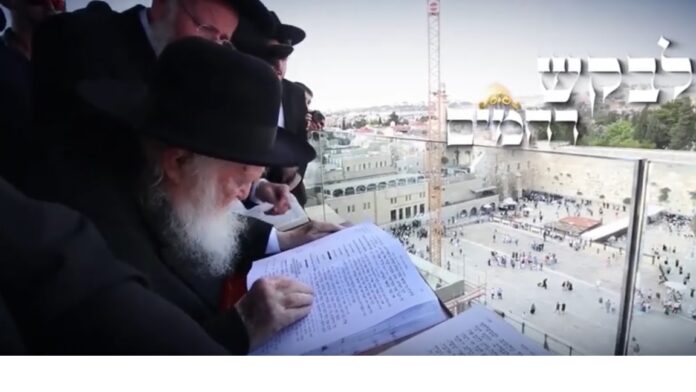 As Israel prepares for the third election in a year, much of the public has has enough of political spin and maneuvering.
However, those who believe in Hashem and His Torah cannot afford to be complacent. As secular politicians become more and more disconnected from traditional values and threaten to erase the Jewish state of all vestiges of Judaism, the Gedolim have instructed that voting for a party that supports Torah values is obligatory, a mitzvah de’oraisa that must be carried out before breakfast and even before davening Shacharis if one’s shul is further away than their designated voting station.

In light of the above, Hagadol Harav Chaim Kanievsky made a decision to embark on a rare trip around Israel, a trip that is quite difficult for the Gadol due to his advanced age and rigorous daily learning schedule.

Harav Chaim instructed that this trip’s focus be the Jews’ greatest weapon, the power of tefillah, and in that light the chizzuk trip was named “Levakeish Rachamim.” A special song was composed in honor of the trip, aptly named “Levakeish Rachamim,” and is replete with hints and phrases from Megillas Esther, comparing the current political situation to the plight of the Jews during the times of Haman, who also wanted to erase the world of Yiddishkeit.

Harav Chaim held an atzeret for the north of Israel in Tzfat on Wednesday evening, will lead an atzeret tefillah at the Kosel on Thursday at 7 p.m., attend a gathering in Beit Shemesh on Motzei Shabbos at 8 p.m. on Rechov Nachal Nitzanim and lead a mass atzeret in Bnei Brak on Sunday.