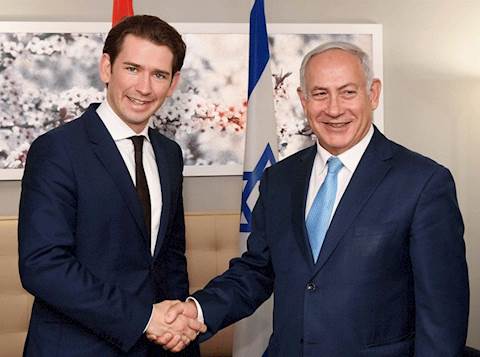 Chancellor of Austria Sebastian Kurz said in an interview with the German newspaper Bild on Sunday that a conversation with Prime Minister Binyamin Netanyahu was what convinced him of the risk of the spread of the coronavirus and spurred him to action.

“Our fear stemmed from the fact that we’re neighbors with Italy and we saw how the medical system there collapsed. I thank G-d for a conversation I had with Bibi Netanyahu in which he said to me: ‘You are underestimating the impact this will have on Europe. Wake up and do something.”

“This was the phone call that shocked me to action,” Kurz emphasized. “This is why we were one of the first European countries that reacted strongly to the coronavirus crisis.”

The current data shows that Austria has 3,026 people infected with the virus and nine fatalities, numbers that would be much higher if not for the increased restrictions that Kurz implemented last week.

After speaking to Netanyahu as well as several Asian leaders, Kurz drastically tightened restrictions in Austria, banning all gatherings of over five people and shutting schools, restaurants and non-essential stores and businesses. Citizens were banned from leaving their homes except for fulfilling basic needs such as food shopping. Travel restrictions were also implemented, banning entry to the country from Italy and other countries with severe outbreaks.

Subsequent data showed that the restrictions were effective in reducing the rate of infections.

Kurz has maintained a warm relationship with Netanyahu since taking office as Austria’s foreign minister in 2013, a relationship that became even stronger when he was elected chancellor in 2017. He is one of Israel’s strongest supporters in Europe, standing up for Israel in the EU and delivering pro-Israel speeches. He also has acknowledged that Austria played a part in perpetrating Nazi crimes and said that as a result, Austria has a special responsibility to the Jews and Israel.